Dept. of Education to Provide Grants to School Districts Penalized for Mask Mandates 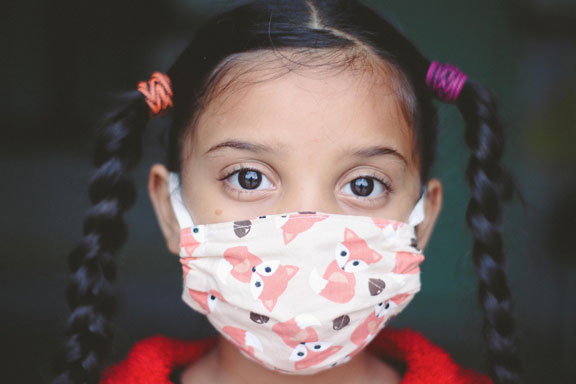 Mask mandates in schools have become a polarizing issue across the country.

On Sept. 9, the United States Department of Education announced that it would start a new grant program to provide financial assistance to school districts that have had their funds withheld by their states for implementing strategies consistent with guidelines from the Centers for Disease Control and Prevention (CDC), to limit the spread of COVID-19.

Per the press release, “Educators, leaders, and parents are working hand in hand in communities across the nation to protect schoolchildren returning to in-person learning, and the Biden Administration will do everything it can to support them in doing right by the kids.

“The new grant program, Project SAFE (Supporting America’s Families and Educators) anticipates using funding within the Department of Education from Title IV, Part F, School Safety National Activities, of the Every Student Succeeds Act. Local school districts would be able to apply for Project SAFE grants that will allow them to restore funding withheld by state leaders—such as for school board members or superintendents who have had their pay cut—when a school district implemented strategies to prevent the spread of COVID-19 in schools. This funding will help districts improve student safety and well-being by advancing strategies to reduce transmission of COVID-19 in schools.”

In August, the Florida Board of Educators threatened to cut funding to school districts that had issued mask mandates to stop the spread of COVID-19 amongst students, teachers, administrators and other staff members.

With many children not vaccinated, the polarizing issue of mask mandates has caused controversy amongst many parents, with some supporting mandates and others opposing it.

U.S. Secretary of Education Miguel Cardona said, “Every student across the country deserves the opportunity to return to school in-person safely this fall, and every family should be confident that their school is implementing policies that keep children safe. We should be thanking districts for using proven strategies that will keep schools open and safe, not punishing them. We stand with the dedicated educators doing the right thing to protect their school communities, and this program will allow them to continue that critical work of keeping students safe.”

The U.S. Department of Education has plans to release Notice Inviting Applications in the upcoming weeks so that school districts across the country can apply for the Project SAFE grant.

The department then plans to make grant awards available expeditiously and on a continuing basis, as needed.

The grants from the U.S. Department of Education will go directly to local education agencies.

According to the press release, “In addition to the new grant program administered by the Department of Education, President Biden’s plan includes actions to ensure schools can remain open for in-person learning and maintain the health and safety of students, staff, and families. This includes calling on all states to adopt vaccine mandates for all school employees, encouraging schools to use American Rescue Plan and other federal funds to regularly test students and school staff for COVID-19, and using the Department of Education’s full legal authority to protect students’ access to in-person instruction. As part of the American Rescue Plan, states and school districts were provided $122 billion in funds aimed at supporting the safe and sustained reopening of schools across the country.”

On Sept. 6, Florida made good on its threat to withhold funds from school districts that implemented a mask mandate to combat COVID-19 in the classroom.

The penalty goes to the Alachua County and Broward County school districts.

Florida State Education Commissioner Richard Corcoran said that parents should make the decision on whether their children wear masks to school.

Corcoran said, “They know what is best for their children.”

To some, if schools can tell a child what type of clothes they can or cannot wear, then they can also tell those students to wear masks while in class.

The New York Times reported, “The department had indicated that it would withhold a monthly amount equivalent to school board members’ salaries. In Alachua County, members make about $40,000 a year, and in Broward County about $46,000, according to State Legislature’s Office of Economic and Demographic Research.

“However, because the state does not pay the salaries of local officials, it cannot withhold salaries directly. Mr. Corcoran had previously said that he might recommend withholding funds ‘in an amount equal to the salaries of the superintendent and all the members of the school board.’

“On Monday, his department said that the counties had been instructed to cut school board compensation—and nothing else.”

Broward County Public Schools released a statement saying that the school district would continue its mask mandate for the time being.

Alachua County predicts that they will lose $13,400 a month for their mask mandate, which is the equivalent of four school board members who voted for the mask mandate.

Carlee Simon, the superintendent of Alachua County Public Schools, said, “I’m very troubled by the state’s action. Our school board members made a courageous decision to protect the health and lives of students, staff and the people of this community, and a court has already ruled they had the legal right to do so. They deserve praise, not penalties.”