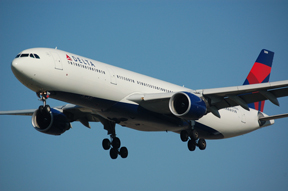 After an alleged racist incident on flight to Washington, D.C., Delta Airlines came to the defense of a Black customer.

Over the years, airlines like Delta have faced criticism for alleged racist behavior by their flight attendants.

However, Delta Airlines would have none of it when it came to a White passenger’s alleged racist comments towards a Black passenger.

“I felt the genuine and sincere concern the flight attendants had for me and the people around me,” said Demetria Poe, 25, the Black passenger on the Delta flight. “I was shocked. I was happy, but I was still fearful. Living in Minnesota, I have seen how things get blown up. I just really wanted to get off the flight.”

Nonetheless, the boarding of the flight for the Minnesota resident began as all flights do.

Poe, on her way to Washington, D.C. for the Commitment March on the 57th anniversary of the 1963 March on Washington grabbed her seat and masked up like all passengers.

While boarding the plane, the White passenger had on a mask with an American flag design.

However, when she sat down next to Poe she allegedly switched her mask to one with a Blue Lives Matter, pro-police design.

Poe said, “The woman was trying to entice me into (an) argument because there was no need for her to flip that mask in my presence. She didn’t do it for anyone else. It was as if she was making a statement and wanted me to know.”

She ignored the statement made by the Blue Lives Matter mask.

However, Poe said the lady made more than a statement with her wardrobe.

She began trying to start a heated conversation on race relations with Poe to get a rise out of her.

After takeoff, Poe said the White female passenger said, “I support blue lives because I support our officers.”

To which Poe replied, “blue lives do not exist.”

On a Facebook post, which has since gone viral, Poe said, “The life of an officer exists, but there is no such thing as a blue life and that statement is nothing but a rebuttal to the fact that (Black Lives Matter) has been disregarded time after time.

“Us saying Black lives matter doesn’t mean all other lives don’t matter. We’re saying if all lives matter, ‘Why is it justifiable for anyone to slaughter Black people?’”

Nevertheless, the racial conversation on board the Delta Airlines plane continued.

Even other White passengers begged with the lady to chill out.

Poe said the other White passengers “snapped on this lady” in attempt to defend her.

She said that the lady went on with her tirade making excuses for racism and excuses for the death of George Floyd like alleged drug use.

Additionally, the White lady told Poe America “ has been the best thing for (Black people) because they can work their way up.”

Poe, a kindergarten schoolteacher, also claimed the lady made statements like, “Africans from the west sold the most slaves.”

Furthermore, the kindergarten teacher said the White passenger said, “The reason why Blacks were 3/4th [of a person] was because the south would have [too many votes].”

Poe said that she stayed “very calm” because she knew the irate passenger wanted to provoke a negative reaction in her.

“I’m marching for something that my grandparents had to march for, and I’m sitting here in the face of racism once again,” she said. “I can’t escape it. Now I’m having someone who is trying to test my humanity and my history all in one breath.”

Even Delta Airlines flight attendants made an attempt to check on Poe.

Furthermore, the flight attendants even offered to move the White passenger.

However, Poe agreed to let the woman stay in her seat after she quieted down a bit.

Poe said, “You could say that I was at the wrong place at the wrong time, but I think that it was the right one.”

Once the flight landed in the nation’s capital, Delta Airlines employees let Poe know that the lady would not be allowed to fly on their airlines anymore because the company does not tolerate racism and discrimination.

Additionally, Poe got her return flight to Minneapolis upgraded and received gifts including a Black Lives Matter Delta pin.

The gesture by Delta Airlines led to tears for Poe.

“This is a major corporation saying that Black lives matter,” Poe said.

She also added the she “will only fly Delta” in the future.

The airlines wrote, “When we say Black lives matter, we mean it. You matter to us, Demetria.”

A spokesperson for Delta Airlines said, “We have a lot of work to do for true equity to be within reach for the Black community, and it’s part of our culture to represent efforts our customers and our employees care about. For now, these pins are for our people and not available for customers, but our teams chose to include a pin for this customer as part of their gesture.”

On a brighter note, the march went off as planned for Poe and many others in attendance in Washington, D.C.

“But I will say that I don’t want to have to go to one like that ever again,” Poe said. “This is something my grandmother marched for when she was young, and I don’t want my future children to have to do this, too.”

Poe is not only a kindergarten schoolteacher but also the CEO and founder of Scholar School LLC in Minneapolis.