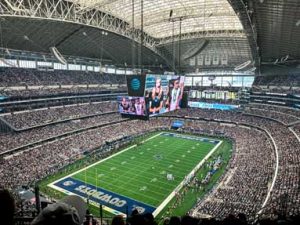 On Thanksgiving 2022, Dallas Cowboys owner and general manager Jerry Jones spent a lot of time at AT&T Stadium (affectionately known as “Jerry World”) explaining why he was in a picture from 1957 with people protesting school integration in Little Rock, Ark.

Despite growing up in segregated Arkansas, Dallas Cowboys owner Jerry Jones said he interacted with African-Americans all the time at his parents’ grocery store.

Despite appearing in a photograph published in a Washington Post article in which Jones appears with a group of White protestors trying to stop African-American students from integrating North Little Rock High School in Little Rock, Ark., the future billionaire businessman said he was only at the protest out of “curiosity,” not because he was against integration.

Jones said, “That was, gosh, 65 years ago and curious kid, I didn’t know at the time the monumental event that was going on. I’m sure glad that we’re a long way from that. I am. That would remind me: Just continue to do everything we can to not have those kind of things happen.”

However, not all of Jones’ detractors are convinced that he is glad the country is a long way from that because of how he spoke out against NFL players protesting systemic racism and police brutality by kneeling during the National Anthem.

Many more have questioned why the Dallas Cowboys have never had an African-American head coach during their storied history and throughout Jones’ tenure as owner and general manager.

Speaking on the school integration protestors, Jones added, “Nobody there had any idea, frankly, what was going to take place. I’ve got a habit of sticking this nose in the right place at the wrong time. It’s a reminder to me of how to improve and do things the right way…I’m not cavalier about it. I’m genuine about it.”

Although Jones said no one at the protest knew what was going to take place, it did come only five days after former President Dwight D. Eisenhower sent in federal troops to make sure Little Rock Central High School allowed nine African-American students, known as the Little Rock Nine, to integrate that school despite heated protests that turned violent.

He told reporters about his upbringing in a predominantly African-American area in Little Rock, Ark.

Jones said he always felt connected to his hometown and his upbringing, and he even brought greats like Hall of Fame quarterback Troy Aikman to the town for a visit.

Jones highlighted his family’s record of giving back to the neighborhoods in Little Rock, labeling his adolescent years in the segregated South as a part of his background.

Jones said, “Those years certainly marked me and made me a way that, as we all stand here today, we look for ways to get better, ways to do it better.”

Speaking of the Washington Post’s effort to get NFL owners to speak about race relations, Jones added, “You may have noticed in the same article I was the only one that volunteered. Of all the owners, I was the only one to talk about it, and I’ll talk all day long. I’m not afraid.”

Jori Epstein of Yahoo Sports reported, “Jones also discussed, as he did in The Post article, how necessary connections and networking are for upward mobility in the NFL. He pointed to hiring coaches Jimmy Johnson and Barry Switzer after prior friendships, and downplayed how race could factor into networking. Jones said he could help coaches, including Black coaches, network and connect with those who will promote them.

“He disputed implications that he would actively avoid hiring diverse candidates, citing more than 50 percent of his coaching staff identifies as minorities. Advocating for progressive policies on diversity, he said, wasn’t top of mind when he bought the Cowboys and immediately faced financial challenges. Jones said he was ‘fighting for my friggin’ life’ then, focused nearly on exclusively on solvency.

“Today, Jones has hired and says he will hire diverse candidates when they are his best option. But he’s not focused on the racial makeup of his staff and active diverse recruitment.”

Despite some national media pundits like Jason Whitlock saying that Jones deserves the opportunity to grow from his teenage years, others like former NBA player Etan Thomas look at the recent controversy surrounding Brooklyn Nets star point guard Kyrie Irving as evidence of a double standard in sports and society at large.

Thomas believes that we should not just accept that Jones, 80, has grown since the days of segregation, when Irving had to complete specific steps to prove to the Nets owner Joe Tsai that he did not hold anti-Semitic beliefs.

Amid the Kanye West anti-Semitic controversy, Irving tweeted out a book and a movie about the Black Hebrew Israelites that many deem as anti-Semitic.

Although Irving said he did not agree with everything in the book and movie and eventually apologized, Tsai made his star guard prove to him that he did not hold anti-Semitic views before he allowed him back on the court.

On social media, Thomas said, “If Jerry Jones was at a Nazi rally with a big swatstika (sic) in the background, would it be enough for him to say he was ‘evolved’ or that he was just a ‘curious kid’, or would there be a list of ‘steps’ he would have to take to avoid being cancelled?”

However, Whitlock tweeted, “Join the Crips at 12, drop bodies until age 19, become a rap star at 20 and all is forgiven. Toast of America…A 14-year-old onlooker in 1957 must be canceled. No way Jerry evolved. Only Joe Biden, Jay Z, Snoop, and Democrats evolve.”