Urban Homelessness Has a Black Face 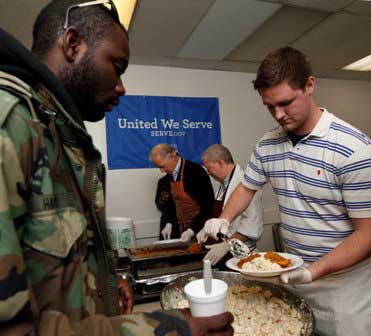 You see them every time that you drive downtown to go to work or take care of some important business.  You see them sleeping under bridges or at intersections with signs that read “WILL WORK FOR FOOD!”  You see them on the local news station in line getting food during the holidays.  And you see them sleeping on the ground when you are standing in line for Black Friday!  Who are THEY?  They are the nameless faces of urban homelessness.  They are the 3.5 million men, women, and children who live on the streets in the richest nation in the world.

Urban homelessness is America’s shameful secret that we try to hide in the corners of our metropolitan areas as if the problem does not exist.

Could it be that urban homelessness is neglected by most of America because the faces of those who are homeless are overwhelmingly BLACK?

Rather urban homelessness is a race issue or not, we all contribute in some way to the problem.  The individual nature of our society and economy has conditioned us to ignore urban homelessness, thus we make the victims of urban homelessness invisible.  Yes, it is easy to say “GO GET A JOB, YOU LAZY BUM,” but consider this for a moment: you are a homeless Black man in America who sleeps under the freeway; you wake up every morning in search of food and employment.  But here is the kicker—when you go look for a job you have to take all of your stuff with you because all of your life possessions fit into one bag.  Employers are afraid to hire you because you are an un-groomed, stinky, Black man who carries a bag around—they know immediately that you are homeless.  You can’t get your hair cut, and you have to wear the same clothes every day.  And though you really want to work and get on your feet, you feel discouraged because there is so much up against you.

Contrary to popular belief, people are not homeless because they don’t want to work, however; there are several reasons that engender urban homelessness including: lack of affordable housing, generational poverty, substance abuse, mental health issues, unsupported release from incarceration, re-entry from military service, or domestic violence.

Whatever the reason, the problem was so bad for Noah Ratler that he decided to do something about it.  In 2007, Ratler took a journey by foot from Houston to Los Angles (the epicenter of the urban homeless epidemic) to bring attention to urban homelessness.

“At first I was just going to walk to the Grand Canyon as a personal goal.  As I was planning the trip I figured out that personal goal could mean more to more people.  And being that I was volunteering at a local homeless organization at the time and taking in what I was learning through my experience.  It could be beneficial to talk about homelessness as I walked. Once it became about homelessness, Los Angeles was a logical conclusion, because it is only 500 miles further, and has the largest homeless population,” says Ratler.

Ratler really wanted to find out how the “mentally ill are treated in our society.” And when he began that journey, it led him immediately to urban homelessness.  Ratler says that “I used to look at the homeless and pass them by not understanding their situation.  Because there is an apathy that occupies the hearts of our society that allows us to look pass them.  If we were to look at them, we would see ourselves in their eyes.  People don’t care to find out what is going on, there is lack of caring, it is like forced objectivity.  Our system is set up to promote the individual above the family, it promotes self-interest.  In promoting self-interest, we focus inwardly and on those who are in our group, are all who matter.  Those who are outside become the enemy, even if that is by not acting to save someone outside our group, when we have the power to save their lives.”

While on the road, Ratler got the opportunity to experience life as a transient Black homeless man—he was able to see how homeless people are treated—“It was different each of the 134 days on the road. When I was in Navaho country, I would see cats hanging out on the corner, drunks, dope heads, that looked just like a scene from my hood, but they were not Black. Everything looked the same, a different setting, with different people, but their struggles were the same as people that I knew.  I was looked at as if I was homeless. When I was on my way to Ft. Worth, I had not shaved or got a hair cut since I left Houston. I yelled across the street to ask a woman for directions, and she yelled back, “I DON’T HAVE ANY MONEY!”  That same day, I tried to go into a couple of restrooms, and they would not let me in, everybody would just look at me when I would try to get something to eat. That is when I started to piece it together; this is what it is like. People would stare at me. When people don’t recognize the humanity in you, it is hard, a hard thing to live with,” says Ratler.

Ratler’s advocacy journey took him all the way to Skid Row in Los Angeles, but it did not stop there. He was so taken back by the problem that he decided to begin the Houston SleepOut in 2008. He says that Houston SleepOut “is an event that allows people to make a contribution towards S.E.A.R.C.H. Homeless Services, an organization that serves over 10,000 homeless per year, in the city of Houston.  The contribution is made by individuals raising money from their friends and family, and coming together with other individuals who have done the same thing to spend one night without a home. In doing that they don’t get to really understand what homelessness is, but my hope is that they get the little insight into how their situation can be different.”

When asked what you think a person can do to eradicate homelessness Ratler said, “I would ask anybody to educate themselves on it. That is my main push, awareness to educate everybody about homelessness, at least introduce it. There is no one answer, it’s just something that you have to think about, and in thinking about it, something will come out. After you educate yourself, find out a piece of the problem that you can do to help it. That could include sending a check, it includes volunteering your time, or if you really get into it, you will find a creative way; your time, your talent, your tokens.”

Dr. Martin Luther King, Jr. said that “An individual has not started living until he can rise above the narrow confines of his individualistic concerns to the broader concerns of all humanity.” And in order to do this, we must all realize that we are connected—that our actions in say College Park, Atlanta directly effects a child in Darfur or a homeless person in Houston.  Noah Ratler, a kid from the South Park neighborhood in Houston, understands it like this, “I am connected to kids from Ikeja, Rio de Jinero, kids in India, kids in Palestine, kids in [the elite Houston neighborhood of] River Oaks. And we all create the world that we live in.  We are connected physically, by genetic makeup. We are 99 percent the same, on more existential level we are connected through the effects of all of our actions. For me to wear a neck tie here, there is a city in China who is designed to build neck ties. So if we all decide to stop wearing neck ties, then there is a city that dies.”

Ratler did something, are you willing?

Faniel is a contributing writer for Regal Black Men’s Magazine.