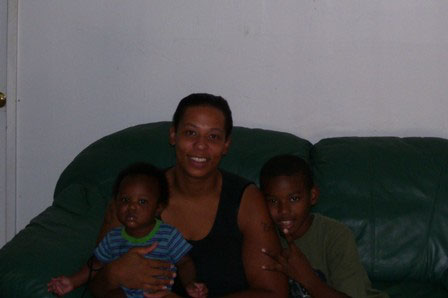 Where do you go when there is nowhere to turn?  What do you do when all of the material possessions you valued so much suddenly disappear?

Many of us go through life oblivious to the challenges that our fellow man faces on a daily basis.  We often looked down upon the single mother struggling to feed her family on food stamps or the homeless man on the street corner trying to earn a few dollars to buy a hot meal.

We sometimes think that we could never be in that predicament, but in actuality many of us are one paycheck away from being in that same situation.

For Enika Ingram, 32, those scenarios have been all too real as she struggled to raise her three children while living in various homeless shelters in Phoenix.  After moving to Arizona to help her mother financially, Ingram had everything she could imagine, a good a job with RJIS and beautiful children.

However, when her youngest son Stephen, six months, was born two months after moving to Phoenix, her mother and grandmother put her out of the house and she found herself living on the streets with three small children.  They lived in their car for a while, parking in various Wal-Mart parking lots because she knew Wal-Mart had 24-hour security and her family would be safe sleeping there.  Prior to finding a place to stay at the Family Promise shelter, CPS took the children away from Ingram for a weekend.

“It was the longest weekend of my life because I didn’t sleep,” Ingram explained.

Throughout the entire ordeal, Ingram kept God in her live and continued to strive toward her goals, because she had three small children that depended on her.

“My kids are basically what pulled me through.  There the reason I got up everyday, went to work everyday, worked like a dog everyday.  I worked day in and night and only got to see my kids in between,” Ingram said.

Despite the hard times, Ingram’s three sons were her inspiration.  Her eldest Joseph, 12, stayed home a couple of weeks to watch the baby when her mother refused to help, but still managed to stay on the honor roll consistently at school.  Ingram’s middle son Adrian, nine, scored the third highest math grade on the Arizona standardized state test.  And in spite of their financial woes, Joseph still found it in his heart to help another homeless person by giving him the spare change in his pocket.

Just as Joseph found a way to assist someone during a tough time, the Ingram family has found assistance from Eric Prim, director of community relations for My Fellow Man Alliance, a non-profit organization dedicated to assisting homeless people find suitable housing and vocational training.

They moved back to Houston, found affordable housing, and Ingram continues to work for RJIS.

My Fellow Man Alliance is currently organizing several events in Houston for February 2008 that will bring awareness to the homeless epidemic and raise proceeds for them to assist people like Enika Ingram.

He emphasized that the major objective of the race is to educate the public on homelessness.

“Anybody can be homeless from college professors to Ph.D. worthy individuals that are living under bridges.  These are decent individuals.  Everyone is not out there trying to hustle or panhandle,” he added.

My Fellow Man Alliance is also branching out to other cities with the same concept of helping the homeless find housing through group homes, assisted living facilities, personal care homes and boarding houses.  Prim is personally managing six facilities in Nashville, Tenn. and three in Miami.  In addition, they will be closing on a 65-unit apartment complex for the homeless in 2008.

“We’re the middle man to help the homeless and agencies, organizations and individuals who want to take care of the homeless,” Prim said.

One individual who is dedicated to helping those in need is apartment owner Naomi Spiller who has dedicated many of her complexes, including Spiller Personal Care in Houston, to the homeless and people with psychiatric issues.

Although she was initially met with some resistance from neighbors with homes near her facilities, many began to see the positive influence she had on people’s lives and she is certain that everyone can have the same impact.

Spiller said, “(Anybody) can be in the same predicament and we are all one step away from being homeless ourselves.”

To read more about My Fellow Man Alliance visit www.myfellowman.org.