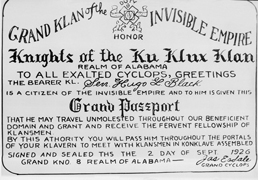 Of all of the atrocities committed by the Ku Klux Klan (KKK), few if any, proved more horrific than the Black Wall Street 1921 massacre in Tulsa, Okla. on June 1 of that year.

Nothing exemplified the resilience and ingenuity of the African-American community like Black Wall Street, which was also known as Little Africa, a mini Beverly Hills, Calif. type community of affluent people of color during the early years of the 20th century.

However, because of racial hatred, progress was met by death and destruction as mobs of bigoted White Americans led by the KKK burned the affluent Oklahoma community to the ground during the Black Wall Street 1921 massacre.

According to San Francisco Bay View, “Black Wall Street, the name fittingly given to one of the most affluent all-Black communities in America, was bombed from the air and burned to the ground by mobs of envious Whites.

“The night’s carnage left some 3,000 African-Americans dead, and over 600 successful businesses lost.  Among these were 21 churches, 21 restaurants, 30 grocery stores, and two movie theaters, plus a hospital, a bank, a post office, libraries, schools, law offices, a half dozen private airplanes and even a bus system.”

Before the Black Wall Street 1921 invasion, the area around Greenwood, Archer and Pine streets, which later became famous, again thanks to The Gap Band, consisted of African-American doctors, Ph.ds, lawyers and other professionals.

Many of the Black and Indian residents owned farmland and had struck it rich in the oil business.

Living in a time when Black dollars leave the Black community in 15 minutes, it is hard to fathom that it took over a year for Black dollars to leave the community during this era, sometimes circulating 35 to 100 times.

However, that type of success in the Black community bred jealousy from a White community that was poor in comparison to the people of Little Africa.

Envy of the Black community is almost guaranteed when the state of Oklahoma only had two airports and six African-Americans personally owned airplanes prior to the Black Wall Street 1921 attack.

According to the San Francisco Bay View, the unity in Little Africa was so great that when a resident’s house burned down, the other residents banded together to rebuild it within a few weeks.

The massacre was so heartless, that many White residents sat on their porch and watched the carnage.

Many residents of Little Africa believed the poor state many White World War I veterans found themselves in, while many Black residents were thriving financially created the jealousy.

However, many White residents blame a report, which stated that Dick Rowland, a Black man had assaulted Sarah Page, a White woman in a downtown elevator.

When a White man tried to take a gun from an armed Black man, the gun accidentally went off and the Black Wall Street 1921 riot erupted.

According to San Francisco Bay View “Truckloads of Whites set fires and shot Blacks on sight.  When the smoke lifted the next day, more than 1,400 homes in Tulsa’s Greenwood District, a prosperous area known as ‘Black Wall Street’ lay in ruins…Experts now estimate that at least 3,000 died.”

Unfortunately for some, the story of the thousands who lost their lives in this act of terrorism has been largely forgotten.

However, Hollywood is trying to make sure that their horrific deaths are always remembered.

The film is written and directed by Dennis Delemar and stars Yasmine Mejia.