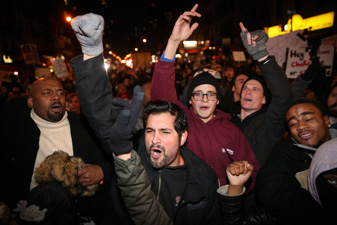 The death of Eric Garner, and other unarmed African-Americans, helped galvanize the Black Lives Matter movement, which aims to end police brutality.

Five years after Eric Garner told a police officer that he could not breathe, Officer Daniel Pantaleo faced a disciplinary hearing that began on May 13.

In 2014, Garner helped galvanize the Black Lives Matter movement when police officers killed him with a chokehold, as he repeatedly (11 times) told them, “I can’t breathe.”

However, Pantaleo’s attorney disputes that his client caused Garner’s death, stating that Pantaleo used a neck hold and not a chokehold, despite what the autopsy stated, while arresting Garner for selling loose cigarettes.

“The evidence will show that the ultimate autopsy was wrong,” said attorney Stuart London. “Officer Pantaleo was justified in using physical force to make this arrest.”

London justified his position by pointing to the video that showed Garner arguing and shouting with the officers.

However, prosecutors argue that Pantaleo’s actions caused the death of Garner.

“His last words, ‘I can’t breathe,’ tell you who caused his death,” said Jonathan Fogel, a prosecutor for the Civilian Complaint Review Board.

The police department has reassigned Pantaleo to desk duty as his disciplinary hearing continues.

A decision is expected within 10 days from the beginning of the hearing.

The ultimate decision rests in the hands of Police Commissioner James O’Neill.

Fogel stated that Pantaleo “gave his victim a death sentence over loose cigarettes because he disregarded his training.”

In 2014, a grand jury refused to bring charges in Garner’s death, captured on cell video by bystanders.

Unfortunately, the U.S. Department of Justice has failed to reach a conclusion four years later, which has outraged Garner’s family.

The statute of limitations runs out on July 17, the fifth anniversary of Garner’s death near the Staten Island Ferry Terminal.


In 2017, the New York Civilian Complaints Review Board concluded that police used excessive force in their arrest of Garner.

He stated that paramedics did “almost nothing” to treat Garner.

However, a medical examiner testified on May 15 that Garner died from asthma caused by the chokehold.

The doctor that examined Garner said that he died because Pantaleo used enough force to cause internal bleeding in Garner’s neck.

Even though Garner had high blood pressure and chronic asthma, the chokehold proved lethal according to the doctor.

“The chokehold is a significant initial factor of the cascade,” said Persechino.

The doctor said that the chokehold and the compression against Garner’s chest “set into motion a lethal sequence.”

Persechino used graphic photographs of Garner that she said showed internal bleeding seen in four layers of soft tissue from his neck, which indicated that he indeed died from an asthma attack triggered by Pantaleo’s chokehold.

The doctor presented photographs that showed a “band of hemorrhaging” that turned from dark red to purple.

“I wasn’t going to be able to sit there and look at photos of my child,” Carr said. “It’s not getting any easier. It’s very emotional being here.”

The New York Times reported, “Dr. Persechino is the third official to testify this week that Officer Pantaleo used a prohibited chokehold on Mr. Garner.

“On Monday, two internal affairs investigators testified that they had recommended in 2015 that Officer Pantaleo face disciplinary charges for using the banned technique.

“And on Tuesday morning, the commanding officer of the police academy, Deputy Inspector Richard Dee, said what Officer Pantaleo can be seen doing in a bystander’s video of the arrest –wrapping an arm around Mr. Garner’s neck from behind and squeezing—‘meets the definition of a chokehold.’”

London explained that Pantaleo used a “seatbelt” technique and not a chokehold.

However, Dee said that the seatbelt maneuver was not an approved technique when Pantaleo went through the academy in 2006 or when he went through training to become a plainclothes officer in 2008.

London also mentioned a report from the Police Department surgeon that blamed Garner for his own death for not submitting to the officers.

“He obviously resisted arrest, your honor,” London told the judge.

London added, “Had he just accepted a summons for untaxed cigarettes, none of this would have happened.”

But Dee added that if Pantaleo did not use the chokehold, which the department has banned for decades, Garner would not have died.

At the academy and during specialized training, instructors constantly warn officers to not use a chokehold.

When Fogel asked Dee if he would have put his hands on Garner, Dee replied, “I would have waited for backup, for uniformed officers to arrive, and I would make one more appeal.”

Regardless of the outcome, the public is watching closely to see if the hearing can mend the relationship between police officers and communities of color.

City Councilman Donovan Richards of Queens, N.Y. said, “The public is watching [and people will] be able to see clearly from this case how serious (Police Commissioner O’Neill is) about holding officers who break the law accountable.”