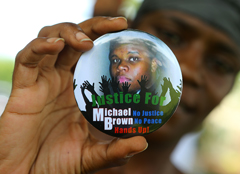 What Really Happened to Michael Brown?

After a filmmaker debuted his documentary “Stranger Fruit” at the South By Southwest Festival in Austin, Texas new questions have emerged about the death of Michael Brown and his encounter with store clerks at a convenience store in Ferguson, Mo.

Brown, 18, was killed after being confronted by Ferguson, Mo. police officer Darren Wilson in 2014.

His death, and the death of countless unarmed Black men in recent years has led to protest movements like Black Lives Matter.

Documentary film director Jason Pollock’s film allegedly “shows that Brown did not rob the store before his deadly confrontation with Ferguson police officer Darren Wilson.  Rather, it shows the 18-year-old exchanged marijuana for cigarillos with the clerk,” Pollock told CNN.

Many residents of Ferguson, Mo. say that the particular convenient store Brown visited is known for selling marijuana and bartering with customers for certain items.

However, store clerks deny any of these allegations.

“There was certainly an attempt to barter for these goods but store employees had no involvement at all in that,” prosecutors said.  “When he left, they put everything back on the counters where they belonged and went about their business.”

In a report from the Washington Post, information exists that Wilson had used racial slurs in the past, and his fateful encounter with Brown might not have occurred exactly as some in the media reported back in 2014.

“Officer Wilson did admit in discovery responses that he used the N-word and has heard former officer(s) use the N-word on at least one occasion but, he did so while repeating/reporting what a victim, witness or suspect etc., relayed to him while conducting an investigation or preparing a report,” Greg Kloeppel, Wilson’s attorney said in an email.  “He never used the N-word to refer to an African-American in a racist or derogatory manner and he never repeated a racist joke while on duty.”

After Washington Post reporter Wesley Lowery released documents from U.S. District Court about Wilson’s encounter with Brown, Michael Harriot of TheRoot.com reported that Brown never reached for Wilson’s gun or punched him in the face.

However, Lowery says the documents do not point blame at Wilson at all for doing something wrong.

The Washington Post reporter says that the documents show that Brown did not try to take Wilson’s gun out of the holster.

Jeremy Kohler of the St. Louis Post Dispatch described the piece in TheRoot.com as overreach and out of context.

Kohler said just because the attack did not come up in detail during the interrogation does not mean it did not happen.

The St. Louis Post Dispatch also stated that Wilson did not contradict himself during testimony because all he said is that Brown did not try to take the gun out of the holster.  That does not mean that he never tried to take the gun at all.