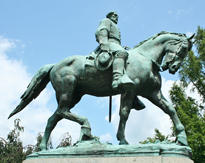 After the deadly White Lives Matter rally in Charlottesville, Va., Confederate monuments have come under fire.

To Keep them or to Remove them, That is the Question

When asked about the removal of Confederate monuments throughout the South, former Republican House Speaker Newt Gingrich said: “I think the point is we ought to be a country focusing on the future, not frothing at the mouth about the past.

“And it tells you something about the intellectual collapse on the left—that all they have is this kind of rabid behavior.  And of course, mayors in towns that are largely Black are going to pander to their audience.  They are going to go out and prove they are popular by doing something that meets the current demagogic needs.”

While some conservative political leaders like former Secretary of State Condoleezza Rice have echoed Gingrich’s sentiments when it comes to the removal of Confederate monuments, what do African-Americans from various cities really think?

Should the Confederate monuments come down?

Does it even matter or change anything if those Confederate monuments stay or go?

Despite the opinions of Gingrich, Rice and others, the deadly events in Charlottesville, Va. last weekend have escalated the removal of Confederate monuments in cities across the country.

According to the Chicago Tribune, “The Southern Law Poverty Center last year counted more than 1,500 things around the country named after Confederate figures or dedicated to the Confederacy, including holidays, statutes, flags and the names of cities, counties, schools and parks.  Nearly half are monuments, which are in 24 states.  Most of the dedications are in the South, but 24 are in the North and 21 in states that did not exist at the time of the Civil War.”

RegalMag.com reached out to a group of African-American men to get their opinion on the removal of Confederate monuments throughout the country.

Derrick Robinson of Atlanta said: “I honestly believe all Confederate monuments need to be removed.  Why would any state in the North or the South honor the enemy of the United States with a statue?  There (are) no statues of (Adolf) Hitler in Germany so we shouldn’t have Confederate monuments here either.  It’s an attempt to hold on to White supremacy ideology.”

Erick Lawson of Houston agreed with Robinson stating America should, “Remove all of that (Confederate) stuff because we are a united nation now.  The history happened, yes, but the country as a whole should not be proud of it.”

Selman Campbell of Indianapolis believes that removing the monuments would be nice, but he does not believe that removal of the statues is enough.

“It’s a start, but just removing them won’t make people forget history,” Campbell said.  “There needs to be some education on the importance of removing them and what message it’s sending.”

“I’m not intimidated by Robert E. Lee’s statue,” former city council member Sandra Crenshaw told the Dallas CBS affiliate.  “It doesn’t scare me.  We don’t want America to think all African-Americans are supportive of this.”

According to the New York Post, several Buffalo Soldiers historians and Sons of the Confederacy joined Crenshaw in support of keeping the Confederate monuments in Dallas.