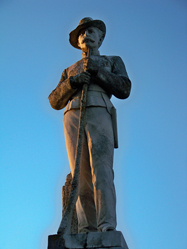 The possible removal of Confederate monuments across the country has become a polarizing debate.

North Carolina Confederate Statues to Stay in Place With Context

The state of North Carolina has decided to keep three Confederate statues at the state capital in Raleigh, N.C. with an explanation of slavery and all that it entailed and erection of a monument in honor of the state’s African-American community.

The North Carolina Historical Commission says that its hands remain tied on the polarizing matter because of a 2015 state law that does not give them the legal authority to remove the statues.

“The commission’s decision essentially was that the 2015 law really does not give them the flexibility to move those monuments,” said Michele Walker, a spokesperson for the North Carolina Department of Natural and Cultural Resources.

The 2015 North Carolina law states that the state can move monuments if the monument remains protected and moved to another equally prominent place.

North Carolina enacted the 2015 law after a Confederate flag got removed from the South Carolina capital in the wake of a mass shooting by a White supremacist at a predominantly African-American church in Charleston, S.C.

Confederate groups recently expressed pleasure with the decision not to remove the three Confederate monuments in Raleigh, N.C.

A spokesperson for the North Carolina chapter of Sons of Confederate Veterans said the decision was “the best outcome we could have hoped for under the circumstances.”

However, the commission voted the governor’s recommendation down by a vote of 10 to one.

That vote came down two days after the “Silent Sam” monument on the campus of University of North Carolina came down in a demonstration attended by 250 people.

The incident, taking place the day before the fall semester started at University North Carolina, sparked jeers as well as cheers.

“It was all smiles and joy and dancing and jubilation, to be honest,” said Jasmine Howard, 28, an alumnus of the state’s flagship university. “It was really a joyous moment.”

Protestors even tried burying the head of “Silent Sam.”

However, school officials soon secured the remains of the monument and moved it from its original location.

University Chancellor Carol L. Felt admitted that the “Silent Sam” monument has divided the campus for many years, but she said the toppling of the statue in such a way was “unlawful and dangerous.”

They added that “mob rule and the intentional destruction of public property will not be tolerated” and that the campus police department would conduct “a full criminal investigation.”

The state legislature also spent Tuesday denouncing the demolition of the monument on the University of North Carolina campus.

North Carolina has not been alone recently in dealing with how to handle Confederate monuments that became popular in the early 20th century and during the Civil Rights Movement of the 1950s and 1960s.

Proponents see the monuments as a way of preserving history, not glorifying the institution of slavery.

However, opponents of the monuments see it as glorifying White supremacy and find it disrespectful to many in the African-American community, who are descendants of slaves.

Over 30 cities have removed or relocated Confederate monuments.

Currently, cities such as Houston, Atlanta, Pensacola, Fla., Jacksonville, Fla., Birmingham, Ala. and others have debated what to do with their Confederate monuments.

Furthermore, schools named after Confederate soldiers and leaders in cities like Houston and Austin, Texas have changed their name.

For instance, John H. Reagan High School in Houston changed its name to Heights High School in honor of The Heights neighborhood where the school is located.

No matter what happens to the remaining Confederate monuments, many historians believe no easy solution exists.

Pleasing everyone is impossible.

Nevertheless, many scholars and historians look to Germany as an example.

After World War I and World II, Germany erected many statues honoring the military and the Nazi regime.

Throughout history, calls for removal have grown louder with some even vandalizing the statues.

Germany’s solution to keep the statues while adding other statues to add proper context reminds many of the decision made by lawmakers in North Carolina.

Niels Eichorn wrote, “The result is that the [military memorial] Kriegerdenkmal [in Hamburg] is now a site with a monument and counter-monuments, creating a public commemorative landscape that offers something for all sides, while also serving as a provocation for all sides as well. Neo-Nazi rallies continue to occur at the Kriegerdenkmal to celebrate Germany’s military past and calls for a revival of Nazism. On the other side, peace activists have gathered at the monument to protest war.”