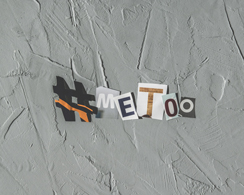 Many prominent people have seen their careers stalled because of allegations of sexual misconduct during #MeToo movement.

How The Mighty Have Fallen

A new day is here.

The bro culture and babe culture are over in the workforce.

No longer can men or women abuse their power and force themselves upon others and threaten someone’s livelihood if they do not play the game.

The first domino to all was probably comedian/actor Bill Cosby, once known as America’s dad.

After years of rape allegations getting ignored, Cosby ended up in a prison cell.

Upon Cosby’s punishment, many began wondering about other high profile celebrity men like Harvey Weinstein and their own checkered past.

But on Feb. 24, Weinstein got the Cosby treatment as well.

Musical genius R. Kelly even found himself behind bars after surviving allegations of statutory rape dating back to the early 1990s.

While many believed that the justice system held African-American entertainment titans to a stricter code of conduct, a look at the #MeToo movement in totality shows that justice might finally be colorblind at last.

Harvey Weinstein—For years, Harvey Weinstein reigned supreme as a Hollywood kingmaker. He could make stars by snapping his fingers. And he could break careers down if he did not like a particular actor. But the term casting couch seems tame considering that over 100 women accused Weinstein of sexual assault and/or sexual harassment. However, on Feb.24 Weinstein got convicted of two crimes, criminal sexual act in the first degree (Miriam “Mimi” Haleyi) and rape in the third degree (Jessica Mann).

Bill Cosby—The whispers surrounding Bill Cosby’s alleged mistreatment of women have followed his career since the early days. Cosby even openly joked about using the aphrodisiac Spanish Fly on his popular comedy albums of the 1970s. But despite the allegations, Cosby wielded too much power in Hollywood for people to truly speak out. When comedian D.L. Hughley challenged Cosby during a taping of a radio show about his alleged sexual assaults, Hughley’s career almost went up in smoke. Although Cosby held considerable power in the radio, television and film industry, he could not control the Internet. So when comedian Hannibal Buress went viral talking about the rumors, Cosby’s career (and freedom) disappeared like those who try to challenge the rich and powerful in Hollywood.

Matt Lauer—Matt Lauer had to have it so much that he had a way of locking a door from his desk, trapping his female colleagues in his office. That’s some real 21st century sexual harassment right there. His modus operandi seemed tacky with a little bit of technology. As a present Lauer once gave a co-worker a sex toy, explaining in a note how he wanted to use it on her. He dropped his drawers in front of one colleague, fully exposing himself. When the co-worker appeared visibly shaken, Lauer reprimanded her. That’s privilege and power when a woman gets reprimanded for not responding to unwanted sexual advances from her male colleague. Although she turned down Lauer’s advancements, the former co-host of NBC’s “Today” saw his career advancements halt completely. Now “Today” has two female co-anchors. Today is truly a new day thanks to the #MeToo movement.

Roger E Ailes—Sometimes, people will do anything to further their career. That often means accepting sexual harassment and sexual assault just to keep their dreams alive. But unlike Weinstein, Roger E. Ailes did not just control the careers of many talented journalists as head of Fox News, he also controlled many conservative politicians, helping three Republican presidents reach the White House by creating their media strategies. Those past presidents included former President Richard Nixon, former President Ronald Reagan and former President George H.W. Bush. Ailes also advised the campaign of President Donald Trump. If a person wanted to make it in conservative media or conservative politics, Ailes was a kingmaker. But when former Fox News journalist Gretchen Carlson complained about retaliation and sexual harassment at the hands of Ailes, and had receipts to back her allegations, Ailes got dethroned, which helped spark the #MeToo movement in the first place.

R. Kelly—R&B legend R. Kelly called himself the “Pied Piper of R&B” for crying out loud. The “Pied Piper” used music to lead children away, never to be seen again. Fans and foes saw him on a sex tape with a girl that looked underage. He married the late R&B songstress Aaliyah when she was 15-years-old. But it took the #MeToo movement and the documentary “Surviving R. Kelly” to finally stop his alleged reign of terror against underage girls.

Jason Mitchell—Actor and New Orleans native Jason Mitchell had a bright future ahead of him. His performances in “Straight Outta Compton” and “Mudbound” made him a burgeoning star. Awards seemed likely in his future. And unlike many other stars shot out of the sky by the #MeToo movement, Mitchell allegedly did his dirt at a time when everyone in Hollywood and corporate America should have known that sexual harassment would not be tolerated. But that did not stop him because he allegedly sexually harassed a co-star on “The Chi” and got dropped from the critically acclaimed television show. He also got dumped by his agent and dropped from the Netflix film, “Desperado.” The alleged sexual misconduct got so bad that Mitchell’s “The Chi” co-star Tiffany Boone had to bring her fiancé, actor Marque Richardson (“Dear White People”) on set when she shot scenes with Mitchell.

Kevin Spacey—Sexual harassment, sexual misconduct and sexual assault works in a multitude of ways. The victims can be female. The victims can be male. The culprits can be male. But the culprits can also be female. It also knows no sexuality either as actor Kevin Spacey had to fight accusations of groping and making unwanted sexual advancements towards a male massage therapist boy during a 2016 massage. Another man also accused Spacey of fondling him at restaurant in Nantucket, Mass. when he was 18-years-old. The allegations led to the canceling of the Netflix show, “House of Cards,” which starred Spacey.