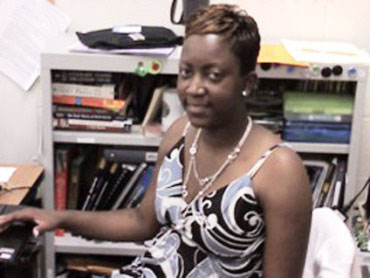 Winning Teacher of the Year at a Gwinnett County, Ga. high school didn’t stop Keenon Aampay Hall from being involved in the controversy which is teachers’ affairs with students (Photo courtesy of CBSNews.com).

Teachers’ Affairs with Students: Is There a Double Standard for Victims and Offenders?

C. David Moody gave his first keynote speech for the Georgia Center for Child Advocacy last month—not as the lauded CEO of C.D. Moody Construction that earned him the 46th spot on Black Enterprise magazine’s 2012 list of 100 largest Black businesses—but as a survivor of sex abuse.

It took 26 years to reveal the emotional scars and trauma Moody received as a 10-year-old boy sexually attacked in his childhood home in Chicago by his babysitter.

“He (the babysitter) was the son of our regular babysitter.  She was unavailable [the night my parents were going out], and so she sent her son,” Moody, 56, recalled.

The male babysitter started by showing Moody pornographic images and soon after made his move.

“It was sexual,” Moody declared. “It wasn’t just improper touching, it was sexual. He did sexual activities.”

Moody remembers the sexual attacks occurring twice and came close to being abused a third time until his mother unknowingly intervened.

“My mother got inkling something wasn’t right,” said Moody, despite concealing the abuse from everyone. “My parents were about to leave for the night, and me and him were in another room.”

Armed with a mother’s intuition, Moody’s mother asked the babysitter to leave then instructed Moody not to let anyone touch him.

According to the Center for Sex Offender Management, one in every seven boys and one in every five girls are sexually abused by the time they’re adults.

The report highlights a decrease in child abuse cases compared to 2007 when the national average was 723,000.

As comforting as the statistics may be for parents, Lawrence C. Kasmen, a board member of the Georgia Center for Child Advocacy, a non-profit organization serving the needs of sexually and physically abused children, is skeptical.

“I can provide you statistics that are the exact opposite,” said Kasmen. “The number of cases—forensic interviews with family members and children—they’ve (Georgia Center for Child Advocacy) seen has increased. I’m thrilled to hear [child abuse cases decreased], but I’m skeptical. It’s more apparent than ever in the news.”

Beyond the avalanche of newspaper headlines and evening news reports is a never ending blanket of abuse that knows no bounds.

These serial reports of teachers’ affairs with students not only frighten parents, but also make them paranoid about their kids’ safety in school.

“I’m not afraid of someone coming in and shooting up the school.  I’m afraid of someone molesting my child,” said Madaly Sanchez, a Brooklyn, N.Y. mother of two daughters. “Now I have to look at how safe my kids are in school. I can’t home school them because I have to make money and private school is too expensive.”

Yet, even private schools aren’t immune to the cycle of teachers’ affairs with students. The far-reaching, decades long sexual abuse discovered at elite Horace Mann High School in The Bronx, N.Y. by the New York Times last year, has many questioning how widespread teachers’ affairs with students are and the public’s differing reactions between young boys being sexually abused and young girls, as well as male offenders and female offenders.

The first involved a male teacher offering to give his 16-year-old student extra credit if she posed in underwear. The story not only motivated disgust and anger from show panelists—made up of a lawyer and sex therapist—but also speculation that the female victim was previously abused by a parent or had a crush on the teacher and was manipulated.

Whereas the second story revolved around a mid-twenties female teacher who started an affair with her male 17-year-old student and is now claiming they fell in love.

Here is a viewer’s take on this teacher’s affair with a student: “Well, this case clearly demonstrates not everybody is a victim. And I’ll tell you this ladies, if that had happened to me when I was in high school, I would have thanked my lucky stars.”

“We live in a culture where we stereotype males and females. We don’t see males as victims. We stereotype that as lucky him. We don’t understand this is sexual abuse,” said Shakeshaft, Ph.D., professor of educational leadership at Virginia Commonwealth University. “Based on stereotypes about male sexuality, what we find is that issues about trust and being exploited (are) the same between males and females.”

Fred Goodall, creator of the Mocha Dad blog dedicated to sharing his fatherhood experiences, believes the best way to tear down those stereotypes is not lay the foundation for them to exist.

“I wrote a (blog) post on sexual abuse and it was [instructing] parents to stop teaching our sons about sowing their wild oats. That’s no way to teach boys because there has to be a girl to sow those oats on,” advised Goodall with a brisk laugh. “We have to teach the same methods to both boys and girls.

Goodall, father of a 12-year-old daughter and two sons ages nine and five, was nearly sexually abused when he was 10 years old and said there shouldn’t be a double standard when it comes to kids and sexual assault.

“If your kids are abused, this person preyed on them—whether it’s a male or female child, we have to protect them the same way,” said Goodall, a Houston native. “They’re young; they don’t know what’s happening.  It’s easy for an adult to take advantage of a child.”

It’s called grooming. Sexual predators use a variety of methods to attract kids that include lying, isolating them, manipulating them into a sexual affair and making them feel complicit about it.

Teachers’ affairs with students also have another layer of abuse; access to students through social media sites.

According to Shakesaft’s Educator Misconduct report, commissioned by the U.S. Department of Education in 2004, abusers are people that students most like and parents trust and respect. Shakeshaft said teachers’ affairs with students have the same grooming patterns whether the abuser is male or female.

“Their similar; male offenders (are) more likely to court female students, do a lot of romantic things. Female predators go directly to sex,” said Shakeshaft. “But it’s important to note that a majority of the abuse is male to female.”

The U.S. Department of Justice reports that 96 percent of offenders of sexual assault were male and six percent accounted for female offenders.

It’s also important to note the Journal of Interpersonal Violence published a research report that found victims are more likely to report their crimes if the abuser was male compared to female offenders, which implies an inequity between male and female criminal offenders.

However, there is no national study that evaluates teachers’ affairs with students.

“All the [sexual abuse] cases are under reported,” said Shakeshaft.  “Only 11 percent get reported. For males, it’s more difficult to report because they are taught they should like this instead of fighting it. For many male students, they don’t want to share that.”

Moody buried his abuse so far beneath the surface that it wasn’t until the Penn State sex abuse case that a need to speak out publicly was triggered.

“That one really bothered me.  So many people knew and no one did anything,” said Moody. “I thought I have to find a way to say something, and my blog came about a year later.”

Moody Speaks blog is centered on his rise as a well-respected Atlanta businessman and his struggles coping with the residual damage of sex abuse. Not long after, Moody took a tour of the Georgia Center for Child Advocacy, which became more cathartic then he realized.

“The tour was very good.  Then when I went to the conference room and saw some survivors [of abuse] I just started crying,” recalled Moody. “I cried for three reasons: first was that we even have to have a place like this. That it was even needed. And I cried for kids who have to come there and go through what they have to go through, and finally that something like this wasn’t available when I was young in the ‘60s.”

Asked if Moody would have shared his story earlier had his abuser been the opposite sex, he gives a long pause and says, “I don’t know if it would have bothered me as bad. But it’s speculation.”

Despite his struggles with low self-esteem and negative clouds looming over his head after the attack, Moody managed to be “blessed with an inner drive” that led him to getting degrees from Morehouse College and Howard University, and heading the second-largest minority contractor company in Georgia (behind H.J. Russell & Co.).  His only regret is not reporting his abuser to the police.

Yet, he admits as dark as that chapter of his life has been he refuses to let it steal his joy, and if he can help it, other survivors will be inspired by his story.

“We can get past this,” said Moody. “You don’t have to live a broken life. There (are) a lot of us who have been there. But, my goal is to give hope; you don’t have to be broken forever.”