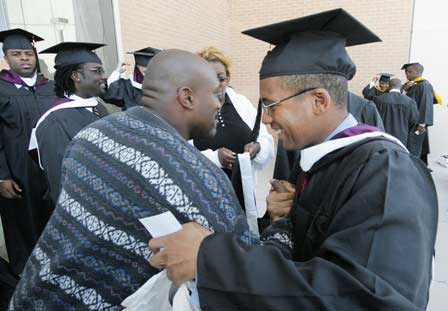 Despite stereotypes, Black single fathers are succeeding against the odds (Ric Feld/AP Photo).

Single Fathers: Doin’ It Their Way

If the Black community had a dime for every time it celebrated single fathers, it would be on the brink of poverty. There’s no shortage on acknowledging single Black mothers for the struggle they experience, which is demonstrated by the variety of mother’s day greeting cards compared to father’s day greeting cards available on the market. It seems that because the proportion of single mothers is often larger than that of single fathers, there is little mention about what a man goes through being a parent without a wife to help support him.

Lyle, a criminal defense attorney, made the decision to adopt a child when he and his wife learned that she couldn’t bear children. After she died, Lyle instantly became one of many single fathers. “I really didn’t know what I was gonna do. My wife took care of our daughter while I worked a lot. So I had to figure out how to be the provider and everything else: getting her ready for school, learning how to comb her hair, going to parent-teacher meetings…all that kind of stuff. I had no clue what I was doing. That was ten years ago. My daughter will be graduating from high school this year. When I asked her if a boy had asked her out to the prom, she said ‘yeah, but I didn’t answer him yet. I think you need to check him out for yourself, Daddy.’ That’s when I knew I had done my job, not as a single father, but a father, period.”

When Richard, a blue-collar worker, was asked about single fathers, he replied with great enthusiasm. “I wouldn’t have it no other way. I’m very proud that I was able to step up to the plate. My ex-wife was a drug addict. We tried to get help for her, but she just wouldn’t stop. I refused to continue to let my son go through that, being let down all the time, and seeing her all messed up, and she started being mean to him. I just wasn’t havin’ it.”

Incidentally, the court wouldn’t give Richard full custody of his son until his wife was given three chances to complete a drug rehabilitation program, which she failed to do. “It was like hell, I thought I was in the twilight zone or somethin’. The courts are so biased to the mother’s side, even when it’s obvious that she is unfit to be a parent,” he added.

Contrary to what is usually reported in the news, single fathers are raising their children to be educated, successful, and productive people. They may not know how to prepare breakfast the way Mommy does or pick out the right dress for their little girls’ birthday party. They may even have a little trouble figuring out how to bring up sensitive topics with their children, but they get through it somehow. Many men feel motivated to be good fathers just by coming from a single-parent household themselves, not having their father around.

That would explain why divorce was not only an unpleasant experience for Mark, but devastating to the extent of not having access to his son. “My father left when I was five; the same age my son was when me and his mother got divorced. His mother was in law enforcement and I worked in healthcare. She left me because I spent a lot of time working, so she used that to try to convince the court that I would be an unfit father, unable to spend time with my son. I had to fight like a dog to get partial custody. I pick up my son on time every time, pay child support, and I still have to hear from her about how no-good I am, just because our marriage didn’t work out. But I refuse to do to my son what my father did to me.”

There are many other untold stories of single fathers who go to bat for their children every day, who are not looking for the world to give them a gold medal for doing what they want to do in their hearts: give their children a better life than what they had. They ask for no special treatment, only to be respected as honorable men, irrespective of their past mistakes. Being a bad friend, lover or husband doesn’t automatically make a Black man incapable of being a father. That is a right that is so basic, and so human, that it should never be taken away from single fathers or the children they bring into this world.

Bancroft is a contributing writer for Regal Black Men’s Magazine, a publication dedicated to the African American community.