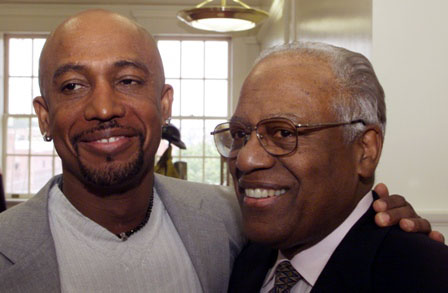 Despite the negative stereotypes, many Black fathers such as Montel Williams’ dad Herman were major influences on their lives (Damian Dovarganes/AP)

As the country watched the extensive custody battle waged by David Goldman and his supporters to get his son Sean back in the United States from the Brazilian government and his deceased wife’s family, fathers of color continue to wage similar battles right here in the United States.

Many of these fathers can barely afford the gas to travel the miles even within the same state to attend the endless hearings, psychological assessments, attorney briefings and other legal wrangling that impedes their primary objective to maintain contact with their children.

Unfortunately, the research has shown a devastating rise in parental alienation cases with women in the majority, who use their children as pawns to punish the fathers.  In many of these cases, the fathers, especially Black fathers, do not have deep financial pockets and are often charged with custody payments and still denied visitations and forced to pay the legal fees for their former spouses too despite making less income in some cases.

It often seems that the courts are biased and assist one side in draining the other while playing favorites with the child as the sacrifice.  Previously, we noted a report by ChildrensJustice.org that stated that four in 10 mothers admitted that they interfered with the father’s visitation at least one time to punish him and almost 50 percent of the mothers saw “no value” in custody rights of fathers.

Because of this alarming trend and the increased awareness of the important role that fathers have in the productive development of their children, a number of states are looking into legislation that would allow children to have more say in their parental choice early on to reduce the levels of intimidation and alienation that keeps unhappy and divided couples fighting each other in the court rooms versus being nurturing, separated parents focused on their children.  Meanwhile, Black fathers have few outlets to tell their stories.

We followed the progress of one such father who was in the early stages of what he was told would be a long process. Toby Brooks, a distribution employee living in Houston, revolves his entire life around his children. His youngest child is the innocent victim in the pending divorce proceedings and the lack of access continues to bother Brooks.

“I still do not understand how fathers like me, who want to be with our children, are (treated) this way,” Brooks adds. “I have only had phone contact and that has been limited and there are attitudes that I am sure my son is being exposed to that are not favorable regarding me. That is just not right.”

The decision to proceed with the divorce became clear to Brooks because the circumstances were not changing regarding the treatment of his oldest child from a previous relationship. “Staying was no longer an option because the situation was only getting worse. I felt that a clean break would be in everyone’s best interests so that we did not have to worry about not making it as a couple, but we could just be good parents. Unfortunately, I cannot see my youngest son nor can the two brothers continue the bonding that they need with me and each other.”

Brooks is now focused on doing what needs to be done to gain access to his son and shares a hard learned lesson for others who want to become parents, especially fathers. “Know who you are planning to start a family with because it can make a big difference when things do not work out, especially with Black fathers who have so many negative stereotypes out there.” Brooks notes. “Be sure to keep all the proof of your support and activities so your case is sound because it is time consuming and expensive.”

Black fathers continue to face an uphill battle right in the United States for custody and visitation rights. Without media outreach and financial resources, many Black fathers lose the battle because the system has drained what little they did have and then labels them “deadbeats.”

This is not to say that all fathers step up to their responsibilities or that all estranged mothers are alienating their children.  This just speaks to the need for more oversight within the family court system to provide equitable, judicial intervention to give active Black fathers, who are stepping up, a helping hand based on understanding versus the systematic “smack down” based on one-sided and misleading stereotypes.