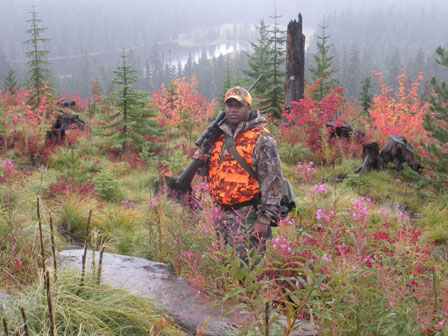 Many outdoorsmen are attempting to increase the number of Blacks in hunting (Photo courtesy of Donny Adair).

If the call of the wild is not your thing, you are not alone. While Blacks are often attributed to outdoor activities such as track and field, they are not associated too closely with field and stream activities.

In addition to camping and other recreational activities, Black hunters are a small but growing population with a purpose.

According to a research report conducted by The Outdoor Foundation, even when outdoor recreation is expanded to include hiking, camping and canoeing along with hunting, 80 percent of outdoor recreationists are White. And this finding is across all age groups nationwide.

The statistics regarding Black hunters specifically are even less.

The United States Fish and Wildlife Service reported in its 2011 National Survey of Fishing, Hunting and Wildlife-Associated Recreation that 94 percent (12.9 million) of hunters were White and approximately three percent (400,000) were Black hunters, out of the 13.7 million total hunters in the United States.

With the tragedy in Newtown, Conn. and the unchecked gun violence that rages in urban communities almost daily, gun laws are having an effect on citizens who want to arm themselves for protection and those who feel their hobby is being infringed upon.

Hunting is a hobby that is usually associated with the White community, while people of color have shied away for a number of reasons, primarily historic.

Traditionally, hunting required access to two things that Blacks were often prohibited from having – land and guns.

The access to playing fields and basketball courts provided outlets for inner city Blacks, but those who grew up in more rural environments were exposed to hunting as a means to find food and for protection.

Also, the negative stigma that the media so often attaches to Blacks and guns has also proven to be a deterrent as violence in the inner city predominantly features a person of color who somehow got access to an illegal gun.

Purchasing and maintaining guns legally is an expensive hobby and having access to public and private lands to pursue this hobby is often difficult for Blacks without the social connections and wildlife property rights.

Black hunters, though small in number, have an interest in hunting as a recreational sport as well as an opportunity to be involved with conservation.

Audrey Peterman, who is a Black outdoor enthusiast, spearheaded a conference recently entitled Breaking the Color Barrier to call attention to the need for more minorities to discover outdoor activities, including hunting, and to engage in opportunities in the conservation arena. The protection of wildlife and open spaces is a universal objective.

Black hunters have mobilized efforts for a dual purpose – to promote the sport of hunting in diverse communities and to educate the public about preserving the outdoors.

An avid hunter, Adair has become a national spokesperson for hunting and its important connection for all Americans.

In his article entitled, “Why Don’t African Americans Hunt?” for the Association’s blog he wrote, “The mission of the African American Hunting Association, LLC (AAHA) is to increase the number of African Americans and urban residents living in the United States involved in hunting, game management, shooting sports, and conservation. The values AAHA is founded on include the rights of all Americans to hunt for food and for sport, the rights of individuals to own and use firearms and other weapons in accordance with the Constitution of the United States and all applicable federal, state and local laws.”

As the news covers tragic occurrences such as the ones that took place in Aurora, Colo., Newtown, Conn. and a growing list of communities, the debate regarding gun control and the legislation proposed by President Barack Obama has brought Second Amendment rights into the forefront.

Adair said, “I would support the initiatives proposed by the president regarding such things as improved help with those who have mental illnesses and increases in school resource personnel. However, I doubt that the restrictions proposed to restrict either the kinds of guns or the size of gun magazines will actually impact or stop people who want to commit mass assaults. We need to study the problem more. Most of the proposed change in gun laws since the recent horrible tragedy has been a knee jerk reaction.”

He added, “We need to change the culture through education. Because many inner city kids don’t have access to shooting and hunter safety classes, they often don’t develop a respect for guns. Some African Americans have been victims of gun violence and never have had a positive experience with firearms.”

Among the projects that the AAHA is involved in, according to Adair, include the promotion and acceptance of the sport of hunting at the local, regional and national levels in addition to increasing the number of Black hunters.

Adair is committed to putting a positive spin on outdoors sports and increasing not only the number of Black hunters, but also Blacks enjoying the outdoors and helping to preserve it for future generations.