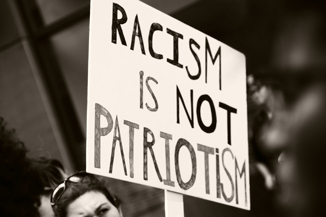 White nationalist groups have inserted hints of patriotism into their message to make it seem more acceptable to potential recruits.

The year 2019 saw a twofold increase in demonstrations and displays of White supremacy nationwide.

That number represents a six-fold increase in instances from 2017.

The ADL reported that two-thirds of those instances involved a group called Patriot Front.

The BBC reported that about 90 percent of all racist propaganda incidents and demonstrations come from the groups Patriot Front, American Identity Movement and the New Jersey European Heritage Association.

The White nationalists group Patriot Front comes from Texas, forming out of a group that helped to organize the Unite the Right demonstrations that led to the death of several counter protestors in Charlottesville, Va.

“The barrage of propaganda, which overwhelmingly features veiled White supremacist language with a patriotic slant, is an effort to normalize White supremacists’ message and bolster recruitment efforts while targeting minority groups including Jews, Blacks, Muslims, non-White immigrants and the LGBT community,” said the ADL in a statement.

The ADL’s Renee Lafair said that Texas tops all 50 states in incidents of racist propaganda with 228 reported incidents in 2019.

Lafair said, “Patriot Front is the reason Texas has the highest activity for any state in 2019.”

Despite the increase in activity, reports show that instances of racist propaganda have not led to an increase in recruitment for White nationalist organizations.

Patriot Front only has a few dozen Texas members.

Furthermore, Patriot Front has only a few hundred members across the United States.

Patriot Front’s activity usually only includes passing out propaganda and chatting on Internet platforms like Discord.

In a statement, the ADL said, “The data is unmistakable. White supremacists are doubling down on their efforts to promote messages of hate and recruit new members.”

The ADL formed in 1913 to fight anti-Semitism.

Universities find themselves in a catch-22 wanting both to promote free speech and keep discrimination off of their campuses.

“The approaches we’ve seen on campuses that have been effective have been when administration says, you know, you have a First Amendment right to do what you want,” Lafair said. “But understand that that is not a part of our culture that we’re building at this campus and that everyone is welcome here and this is an inclusive campus.”

University of Texas at Austin and Texas State University in San Marcos, Texas have both reported incidents.

However, the report states that White nationalists groups have “failed to gain a foothold” on those two campuses.

While many schools have had to endure visitors bringing racist messages and propaganda on their campus despite teaching inclusivity, that does not mean that Black students and visitors do not endure racism from the student body on those campuses.

In February 2016, a group of Black high school students allege that they endured racist comments from White students at Texas A&M University in College Station, Texas.

On Feb. 9, 2016, a White woman allegedly approached a group of teenagers from Dallas and asked if they liked her Confederate earrings.

Furthermore, another Texas A&M student aimed racial epithets, including the N-word, at the high school students demanding that they “go back where they came from.”

Texas A&M University President Michael Young even went so far as to visit Uplift Hampton School to apologize in person.

Nevertheless, some Black Texas A&M alums, dating back to the 1970s, told RegalMag.com of racist incidents they endured while matriculating through the College Station, Texas institution.

A former Aggie football player from the late 1970s told RegalMag.com of having to handle racial incidents at Texas A&M in his own way.

In 2016, Kendal Gallimore, a 21-year-old African-American junior, said that his experience at Texas A&M taught him how to handle prejudice.

Gallimore said, “I’ve experienced more racism here than I had in my entire life.”

At the time of the 2016 incident, Gallimore served as the president of the Texas A&M branch of the NAACP.

In 2016 he said, “A&M knows that if they do not at least look on paper like they’re addressing these issues, we could become another Mizzou.”

In 2015, student activists at University of Missouri forced the president and chancellor to resign after racist incidents on the Columbia, Mo. campus.

Even the Mizzou football team held a boycott after the racist incidents, which included White students calling their African-American counterparts the N-word.

“We’re appreciative of the steps that the president and the administration have taken to recognize this problem but we also definitely know that this is not an isolated incident and actually stuff like this has happened quite often on Texas A&M’s campus, it’s just frequently swept under the rug [or not reported],” said Gallimore.

Students held a sit-in at an administration building at Syracuse University complaining about incidents of racism, homophobia and White supremacy.

Syracuse University officials said that they have tried to compromise with the activists but the university has suspended more than 30 protest organizers.