Through Faith, Man’s Journey Goes From Homeless to Heartening 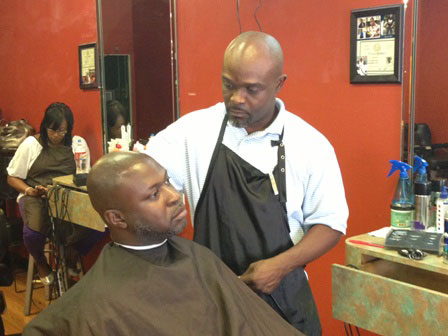 Few would believe the testimony of barber Kevin Bogan , but a strong Christian faith has taken him from the streets to a position of inspiration in the community (Photo Credit: Todd A. Smith/Regal Magazine).

Rock Bottom to Solid as a Rock

Bogan had been on top of the world, but that night he found himself under the Pierce Elevated bridge in downtown Houston, sleeping on the street without a place to go to.

After abusing hard drugs, selling marijuana and squandering a college football scholarship at University of Texas at El Paso (UTEP), Bogan’s mother warned him that he would end up homeless one day, but he could not foresee it because he made too much money.

They even encountered a homeless man in southeast Houston and she told her son that would be his destiny.

Upon waking up from his first night on the streets, that very same homeless man was laying directly next to him and that is when it hit him that he had reached the bottom.

“(My mother said) ‘I’ve been loving you the wrong way,’” said Bogan.  “‘You can come over here and shower (and) eat all day long, but you can’t lay your head here no more.’”

Unlike some who experience extreme difficulties in life, the love was always there in the Bogan family, as was a strong Christian faith.  He was blessed with one of those families that made their children and grandchildren go to church every Sunday.

However, when Bogan was away at UTEP, the furthest thing from his mind was church.

He had been the second ranked running back in Texas coming out of Klein Forest High School and he enjoyed the fame and attention that came from stardom.

Bogan enjoyed it so much that he rarely went to class, but when the gridiron star blew out his knee and the adulation stopped, he desperately sought a replacement for the high he received on the football field.

Life became a party for him when he did not have football anymore, and hard drugs intensified his partying.

“It was a big party,” Bogan said.  “It was an everyday party and that’s how it went down.  It was fun.  It fed my ego.  It fed the other people around me to feed my ego and that’s how I got started.

“If you were already an arrogant, prideful person and people accept you that way, when you get high it rises and their praise rises.  It’s nothing you can do wrong, regardless of all the wrong you’re doing.”

Even though he started down a path of destruction, Bogan did not totally distance himself from football.

James Brown, a former teammate, encouraged him to accept a volunteer coaching position at an El Paso, Texas high school, and while there he stopped abusing drugs and abusing alcohol.

However, he still sold marijuana while coaching high school football and when the school district caught wind of an indictment on drug charges they dismissed him from the coaching position.

Although hustling kept money in his pocket for a time, the hustle was not steady and he found himself sleeping on the streets of Houston.

Despite coming from a strong family where his uncle was his pastor, he ended up homeless without them even knowing it.

While at UTEP he joined Kappa Alpha Psi Fraternity, Inc., but many of his fraternity brothers would not even help him when they found out he was destitute.

Friends would recognize him on the streets and they were amazed at how far he had fallen, but none would help him get off the streets.  Some gave him money, but that only fed his hunger for drugs.

“It was that shovel that you don’t even know you have in your hand,” Bogan said.  “You just start digging because you’re hurt.”

The hurt must have been written on his face because one day after getting high he was confronted by a police officer.  When the officer noticed the name on the driver’s license, he explained to Bogan that they had played against each other in college.

Although the officer should have taken him to jail, he instead urged him to clean his life up and get off the streets.

One day a woman offered him money, but instead he asked her for her Bible that he saw in her purse.  Being raised in the church, he knew he was living outside of the will of God and he knew that he had let the Lord down.

Unlike some people Bogan, “Never blamed God while I was out (on the streets).  Part of it is because…I knew I had a calling on my life.”

The call led him to a transition facility, the Star of Hope Mission where an employee encouraged him to pursue an education at a local barber college.  He had seen Bogan cut the hair of others at the facility and knew that it would be hard for an African American man with a criminal record to get a job.

Upon completing barber college, he began working at Jaelon’s Barbershop in northwest Houston surrounded by true friends who were determined to see Bogan fulfill his destiny.

The former Division 1 college running back walked into the shop at a scrawny 135 pounds, but in the eyes of his co-workers like Larry, his testimony now is that of a real and full-grown man.

Even while he was working at Jaelon’s Barbershop, he was still abusing drugs, and his co-workers let it be known that he wasn’t fooling anybody.  They knew he was a “dope fiend.”  Bogan was a saved Christian, but like all Christians still had to overcome the temptation of past mistakes.

“Why would Satan bother you if you’re on his team,” Bogan said about the constant spiritual persecution that comes after salvation.

And while others gave up on him, Jesus Christ never did.  Through constant prayer and dedication, he totally kicked all of his old habits and has truly become a new creation in Christ.

His uncle explained to him that all good preachers should read the Book of 1 Timothy, and along with the scriptures and his personal testimony, Bogan has preached his story of triumph over tribulation to anyone willing to listen.

He shares his testimony at the Star of Hope to men that are going through what he went through years ago and he preaches to those who sit in his barber chair who seem to be headed down the road of destruction.

The former football standout does not offer hurting people a solution to their problem; he offers them the solution, salvation through Jesus Christ.

Bogan’s road has led to an awesome relationship with God and a different type of clean.  Nowadays, he just isn’t clean in his appearance; he has been cleansed by his Lord and Savior Jesus Christ.

When asked how Jesus will describe his life when it is all done, Bogan replied, with a tear in his eye, that Jesus will say that he didn’t do everything right in life, but he tried.

Sometimes, trying is all that is needed to turn one’s life completely around.