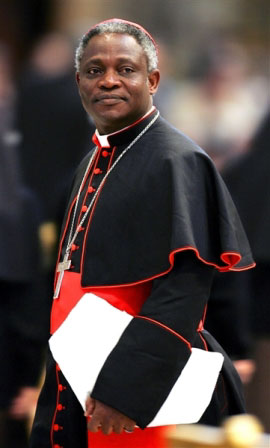 Cardinal Peter Turkson of Ghana is a leading candidate to be the next pope (Photo courtesy of worldnews.nbcnews.com).

Diversity in the Papacy: Is there Hope for a Black Pope?

The Catholic Church is in a state of flux with the decision of Pope Benedict to resign, reportedly due to health issues.

One area of the Catholic Church that has once again risen to the challenge is the potential selection of a Black pope.

Pope Benedict XVI, who was born Joseph Ratzinger, was 78 when he was elected in 2005 to succeed the very popular Pope John Paul II and informed the cardinals at the Vatican that he wanted to step down and the date will be Feb. 28.

This is the first resignation in over 600 years and sets the stage for a meeting of the cardinals to elect a new pope by the end of March.

It was Pope John Paul II who laid the foundation and encouraged the candidacy of a Black pope and placed more Blacks in positions of influence.  Reportedly, the late pontiff announced that his choice for succession would be Nigerian-born Cardinal Francis Arinze fueling speculation that a Black pope would have been named at his death in 2005. However, the post went to the present pope.

Currently, the odds-on favorite is Cardinal Peter Turkson, a Ghanaian-born priest with strong roots in the United States after entering the seminary early in his childhood.

Born in 1948, Turkson moved to New York where he studied at St. Anthony-on-Hudson in Rensselear, N.Y.

In 1992, Pope John Paul II named Turkson as the Archbishop of Cape Coast, which is the former capital of Ghana.

From 1997 to 2005, Turkson served as the president of the Ghana Catholic Bishop’s Conference and was appointed the first-ever cardinal from Ghana.  In Christine Roberts’ article for the New York Daily News entitled, “Pope Benedict XVI’s Resignation May Lead to First Black Pope, Cardinal Peter Turkson,” the current pope sets the tone for discussion and anticipation for the decision.

Roberts wrote, “In 2009, Pope Benedict XVI appointed Turkson the president of the Pontifical Council for Justice and Peace, a high-profile position that sent him around the world for mediation talks. The position put Turkson near the top of the list of potential papal successors.”

According to Roberts, Cardinal Arinze is still a possible candidate thus providing two potential candidates for a Black pope.

The impact on the Catholic Church, particularly on the continent of Africa, could be significant as a pontiff from that region could shed much needed light.

Rachel Donadio reported in her New York Times article, “On Africa Trip, Pope Will find Place Where Church is Surging Amid Travial,” that there were 185 million Catholics in Africa when Pope Benedict visited there in 2009.

The growth has been acknowledged with reports in the International Bulletin of Missionary Research that estimates there will be over 230 million of the world’s Catholics in African in the coming years.

Having a Black pope representative of a growing region within the church has merit.   Archbishop Gabriel Charles Palmer-Buckle, metropolitan archbishop of Accra reportedly told the Guardian that Turkson being the first cardinal for Ghanaians was a “big feather in our cap” bringing much pride to the country and the continent.

So, the debate is on and the results will be known soon as a successor will be chosen. Diversity in the papacy; watch for the smoke!