Houston Pastor: Criticism of Church Can be Alleviated with Love 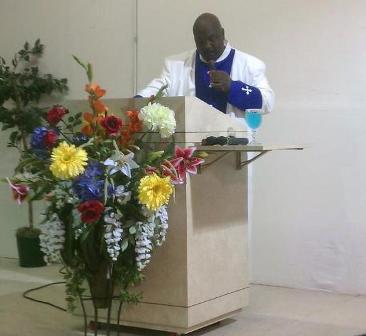 Pastor Tony Luckett says love is the cure for what ails the Christian church (Photo courtesy of Family of Love Christian Center).

What the Church Needs Now is Love, Sweet Love

One does not have to be a religious scholar to know that secularism in America is growing.

According to the Pew Research Center, 12 percent of Americans identify themselves as secular or not affiliated with any religion, up from eight percent in 1987.

Criticism of church for many secularists range from their stance on things like homosexuality, abortion and other hot-button issues and many say they do not feel welcome in some churches because they do not totally adhere to biblical principles.

Luckett pastors Family of Love Christian Center in Houston. He did not stumble upon the name of his church by happenstance.  He firmly believes that the way you reach people in the growing secularism era is through love, not judgment because that is what Jesus Christ stood for.

Luckett said that people that are living their life outside of biblical principles should not be ridiculed because of their imperfections, but should be welcomed and cared for with the love of Christ while understanding that their life does not please God, but He is glad they showed up to a church service.  Once in church, a change in them can occur because they will grow closer to Christ.

“We have to stop directing people to religion and [direct them] into relationship (and) everybody’s relationship doesn’t start off the same,” Luckett said.

The apostle knows firsthand that someone’s walk with Christ can start off in peculiar places.

Growing up in New Orleans, Luckett was exposed at an early age to things that he should not have been exposed to and things that could have taken him down the wrong path in life.

Fortunately for him, he received the call to the ministry as an 18-year-old and he was able to avoid the pitfalls that many of his family members and friends succumbed to.

Although criticism of church often starts with judgmental attitudes, which leads to “church hurt,” Luckett’s upbringing taught him that every person living a controversial lifestyle is not always an evil, unsalvageable person.

People in the streets of New Orleans who knew him as “Lucky’s” son would lean on him to confess their street sins.  Many of these people, which included drug dealers, would seek Luckett out so that he could put their tithes and offerings into church on Sunday.

The pastor noticed that many people living a so-called street lifestyle knew more about the Bible than some church members faithfully sitting in the pews every Sunday.

Furthermore, having a father who battled a heroin addiction for many years and who spent approximately five years incarcerated, affected how he treated “the least of these.”

He watched his father battle his demons for years before the younger Luckett encouraged his father to give up drugs and live for the Lord.  He spent the latter years of his life totally drug free with no assistance from a rehabilitation center.

Seeing that genuine change in people is what opened his heart to people of all walks of life and it is that mentality that could lead to less criticism of church.

Luckett said that his church is filled with exes, such as ex-prostitutes, ex-hustlers and ex-drug dealers, but what keeps them stayed on Jesus is the love they receive from his church.

That message of love is not unusual in the Christian community, but what separates Luckett and his congregation from some of his contemporaries is that it is genuine and every member subscribes to that mission of love.

“What sets this congregation apart and makes it special is that they believe wholeheartedly in the power of prayer, unconditional love, and hearing from the voice of God,” said church member Michelle Jordan, 32.  “There are many prayer warriors and intercessors that stand on behalf of not only our church but for the nations.

“They will love you, help you, encourage you as well as correct you in the love of Christ.  They don’t want to see anyone fall to the wayside.  I have never experienced the boldness and trueness in members of a church till I came here and it continues to grow every day.”

Luckett and his members do not say that criticism of church is not sometimes warranted, but they know that love is the only thing that will correct that criticism.

That love has turned their church from fellowship in a living room to a hotel back to the living room and now into a spacious converted warehouse.  From that, Luckett plans to plant multiple campuses for Family of Love Christian Center, all built on prayer and love for mankind.

And no matter one’s criticism of church, if American churches grow in love, the growth of secularism will subside and be replaced with true Christian faith.