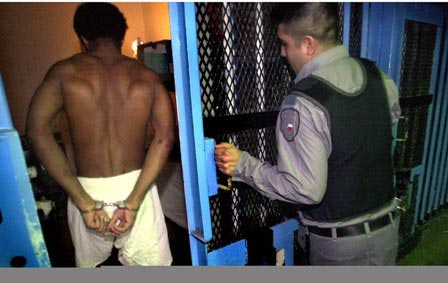 Incarceration of Black males is at an all-time high/AP

Richard Johnson and Dee Spiller had everything.  They were star defensive backs for Eisenhower High School in Houston and on their way to play collegiate football at Baylor University.  They led their high school team to the Texas State 5A semifinals in 1993, and seemed headed for greatness.

Unfortunately, they made the same mistake that many young Black males make, tempted by the allure of street life and eventually graduating to a life of crime.  Johnson and Spiller, along with two teammates, committed several kick door robberies in the Houston area which eventually led to their arrest at Eisenhower High School on a warm spring day in 1994.

The two lost their full scholarships to Baylor and ultimately lost their future as well.  They fell into the trap of being a young Black male with a criminal record, no educational skills, and no hope for the future.

“Many of these men grew up in fatherless homes, and they never had good role models.  No one around them knows how to navigate the mainstream society,” said Joseph T. Jones, director of the fatherhood and works skills center in New York City.

The recent statistics are astonishing.  According to data compiled by scholars at such Ivy League institutions as Columbia, Harvard and Princeton, 50 percent of Black men in their 20s without college degrees were unemployed, and 72 percent of high school dropouts were jobless in 2004.

Furthermore, 16 percent of African American men in their 20s who did not attend college were incarcerated in 1995.  By 2001, that number ballooned to 21 percent.  In addition, by the time Black men reach their 30s, 60 percent of those who dropped out of school would have spent time in the penitentiary.

Black men are at a crossroads.  The question is what the cause of these alarming statistics is and what remedies will reverse this trend?

The lack of working Black men is in sharp contrast to Black women who have taken advantage of economic and social gains to find suitable employment.

“Over the last two decades, the economy did great and low-skilled women, helped by public policy, latched onto it.  But young Black men were falling farther back,” said Ronald B. Mincey, professor of social work at Columbia University.

This phenomenon can be attributed to the glorification of the prison culture in mainstream entertainment.  One only needs to turn on the radio or television to hear young Black entertainers celebrating a life of drugs and crime.  It seems as if Black men earn more respect in the African American community if they spend four years in prison, rather than four years at an institution of higher learning.

Scholars attribute this trend to the lack of education amongst Black males, which disconnects them from mainstream society.

Despite the fact that crime has rapidly declined in urban areas, incarceration rates for African Americans have increased.

More troubling is the fact that among Black dropouts in their late 20s, more are in prison—34 percent—than are working—30 percent, according to analysis of 2000 census data by Steven Raphael of the University of California at Berkeley.

Although the statistics are alarming, there are remedies that can fix this epidemic plaguing the African American community.

It is time for African American men to accept responsibility for their own actions.  Yes, African Americans have arguably endured more hardships and obstacles than any other ethnic group in this country, but it is up to each individual to decide which path they take in life.

It is time for African Americans to put down the drugs and guns and pick up the textbooks.  The notion that Blacks are “acting White” if they strive for excellence in the classroom or corporate boardroom must be abandoned immediately, and African Americans must embrace positive role models from the Black community.

Entertainers who glorify violence in their music and movies need to become better role models to the millions of children who worship their every word.

African American men must assume responsibility and take care of their children.  Successful African Americans must mentor at-risk youth who have no father figures in their life.

Lastly, African American must wake up and realize they are more than just criminals and thugs as the mainstream media portrays them.  African American men need to be aware that their ancestors were royalty in Africa, and that same regal blood still flows through their veins today.