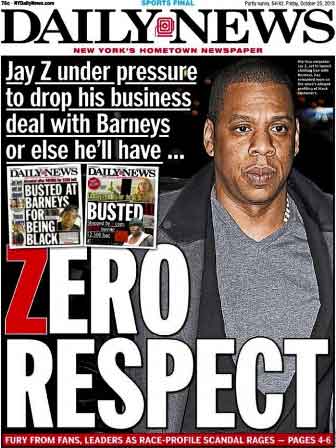 Shop and Frisk: A Historical Crime in the Spotlight Again

Last month, Christian filed a discrimination lawsuit claiming he was racially profiled by the NYPD and Barneys staff who did not think he could afford the belt, and questioned the ownership of his functional debit card, even after he presented matching ID.

Other shoppers hearing Christian’s story on the news have now begun to come out with similar stories of racial incidents, not only at Barneys but Macy’s as well.

These incidents have sparked a firestorm of news stories, public outcry and even political action against what is now being called “shop and frisk.”

“As we continue to deal with issues of racial profiling and stop and frisk, we are alarmed that we are now dealing with a climate of shop and frisk. It is in that spirit (that) we have planned and (will) continue to move forward (with) some mass mobilization before the holidays to address retailers on that issue,” Rev. Al Sharpton said at a press conference after meeting with Mark Lee, CEO of Barneys and other Black community leaders.

While rapper Jay Z did not yield to mounting pressure to pull his BNY SCC fashion collection from Barneys, he did cancel the line’s launch party.

“I will take this into my own hands with full power to recommend, review and revise policies and guidelines moving forward. I am choosing to take this head on,” the rapper wrote on his website.

“We are conducting a thorough review of our practices and procedures as they relate to these matters to ensure that they reflect our continued commitment to fairness and equality,” Lee said in a statement.

But racism in the retail industry is nothing new, and according to some the act of shop and frisk has been practiced since desegregation.

According to King Downing, founder of the Human Rights-Racial Justice Center and former National Coordinator of the ACLU’s Campaign Against Racial Profiling, when Macy’s first brought in Black designers they put them on their own floor, which included jail cells for shoplifters.

Downing said there are files upon files of retail discrimination cases, not just in New York or at Barneys, but from many large chains across the country.

Prominent examples abound. In 2010 for example, Wal-Mart lost a retail discrimination case and was ordered to pay a Black woman for the mental anguish and public humiliation she faced after employees at the store required her, and none of their White patrons, to show a receipt of purchase before leaving the store in Cicero, N.Y.

The incident was caught on security cameras and Wal-Mart was also ordered to set up anti-discrimination training.

In light of all of this, in New York, policymakers have taken action.

At the hearing, the Commission on Human Rights gave 17 large department stores just three days to hand over their shoplifting policies and records on all individuals accused in the last two years for city review.

Maybe with the increased publicity, shop and frisk arrests like Christian’s will not be in vain.