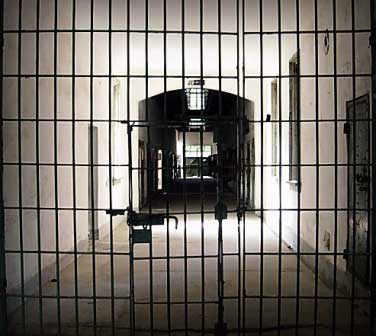 Wearing blue jeans and a brown sweater—the standard outfit for new releases—Wesley Thompson nervously walked off a chartered bus on a warm spring day in late April and into a crowded McDonalds near Schuyler County, New York.

Before reaching the cashier’s counter his eyes scanned the menu as he contemplated what to order, and a realization began to take root: after six months of incarceration this was the very first choice he would make as a free man. A wide smile formed as he processed this new reality of having options.

Less than a week after being on parole from the Monterey correctional facility, a minimum-security  prison in Beaver Dams, N.Y. specializing in Shock Incarceration; a six-month program that includes military style hard labor, drug treatment and counseling and GED courses, he discovered just how limited the long term options are for former inmates reentering society.

“When I first got out I had no home. I considered going to a shelter.” Thompson, 26, revealed to Philanthropedia, a website devoted to evaluating nonprofit organizations.

Within the same week of his release the Queens, N.Y. native was enrolled in an employment placement organization for former inmates by his parole officer.

The Center for Employment Opportunities (C.E.O.), a non-profit organization that offers skills assessment, full-time job placement and long-term career planning programs exclusively for former inmates, placed Thompson in their transitional work program, where he worked as a janitor in the financial district to put some money in his pockets.

“Every cent I earned, I saved. I didn’t need to commit crime to get by,” says Thompson.

However, for most former inmates searching for employment upon release is a battle of endurance in jumping over barriers that limit their progress.

According to the Bureau of Justice Statistics, over 700,000 sentenced prisoners were released from state and federal prisons in 2010, an increase of almost 20 percent from 2000. A 2004 recidivism study focused on three states and found that less than half of released prisoners had secured a job upon their return to the community.

“The economic climate has made it hard to find work across the board,” says Amelia Thompson, senior project director of The Prisoner Reentry Institute at John Jay College of Criminal Justice. “People with a criminal record have an even harder time accessing sustainable employment during the recession.”

Thompson adds that race is also a factor. “As Michelle Alexander discusses in her book, The New Jim Crow, having a criminal justice history has functioned as a way of barring large groups, Black men in particular, from accessing key social institutions including employment and education-the same pieces that are proven to reduce the likelihood of someone recidivating.”

Bronx, N.Y. native Baron Johnson, 24, did five years at Queensboro Correctional Facility for robbery, and was paroled in fall 2010. The father of four was anxious to find a job, but became discouraged with the lack of opportunities available.

“At parole, I was talking about how frustrated I was that I didn’t have a job,” says Johnson on the ‘Second Chances’ Panel Discussion hosted by Brooklyn Public Library in March.

It’s a level of disappointment that is all too familiar for former inmates searching for a new start that begins with employment and, in some cases, ends with a check mark next to conviction on a job application.

Steven Raphael, professor of public policy at the University of California, Berkeley, conducted a survey (included in his research paper, Improving Employment Prospects for Former Prison Inmates: Challenges and Policy (April 2010) for the National Bureau of Economic Research to analyze private employers’ attitudes toward hiring workers with criminal records. His findings note that 71 percent of private companies probably would not or definitely would not hire former inmates. In addition, 60 percent of private employers reported that they always check criminal records before hiring workers, and 78 companies said they use an outside security agency to run background checks on applicants.

Raphael cites several reentry programs designed to combat these challenges.  After analyzing 50-in prison and post-prison interventions he found that the reentry programs yielded a five percent decrease in criminal activity for post-prison employment programs, thereby helping to reduce recidivism, where nationally two-thirds of all released prisoners are behind bars again within three years.

Some transitional programs—produced as a result of The Second Chance Act President George W. Bush signed into law in 2008 distributes federal grants to state governments and community-based organizations to provide job training and placement services to former inmates—are shown to cost taxpayers less than what  would be spent operating prisons.

C.E.O., awarded funding from the Act in 2010, is lauded for recently saving New York taxpayers $8,300 per former inmate with their program that provides participants paychecks after each workday.

The New York Times reports that each year incarceration costs more than $27,000 per inmate in New York State.

MDRC, a research organization reviewing social policies, cites C.E.O. for creating benefits between $1.26 and $3.85 per dollar spent on former inmates, a buffer worth $4,900 in savings, per participant.

The true value of the program is in the lives that are altered as a result of the opportunity.

It has led Johnson to a full-time position in sanitation with exasperations of being an EMT worker, and Thompson on a road to guiding others to start over as a retention specialist at C.E.O., a life he never envisioned as a teenager selling drugs until after being released in 2006.

“I had no regards for life. I was ignorant of everything going on around me,” Thompson tells Regal. “I didn’t care if I lived the next day; it was either jail or death and I was comfortable with both options. (Then) I started to be aware of the effects my actions had on the community.”

Mindy S. Tarlow, executive director of C.E.O, credits the program’s success with targeting young adults most likely to recidivate and immediate interference at a crucial time.

“We are intervening at the most important time, when people want to work the most, need to work the most, “ says Tarlow. “When the consequences of not working are the gravest, and unfortunately when it’s the hardest to find a job.”

It’s also difficult to maintain government funding for the over 300 reentry programs scattered across the country sponsored by the Second Chance Act.

While Congress approved $70 million in funding for the legislation, the Senate appropriations committee eliminated their funding this past fall. The House and Senate approved a “minibus” appropriations report that provides $63 million for the Act this year, a $20 million reduction from last year’s funding.

“[The Act] is a noble effort but I don’t see it doing much good,” says Demico Boothe, author of Getting Out & Staying Out: a Black Man’s Guide to Success After Prison. “I’m on the ground and it’s a serious problem.  (The program) needs to be more standard, more widespread and more money spread into it.”

Boothe—who was incarcerated for over a decade on two separate charges involving drugs and counterfeit money—believes we have a long way to go in tackling the fact that Black males account for a little over three percent of the state and federal prison inmates, compared to just under 0.5 percent of White male inmates.

“(An) ex-felon is basically unemployable,” Boothe tells Regal. “No private sector jobs will hire you—Walmart will not even hire you to sweep the floor. So, how do you expect to change your life around?”

The Tennessean suggests making your own way, a path he journeyed down after his second release from prison in 2003. He opened a janitorial service during his parole and in 2007 started Full Surface Publishing, a result of several major book publishers rejecting his first book, Why are so many Black Men in Prison.

“Menial jobs you trying to apply to, you don’t have work history, don’t have skills,” says Boothe. “(If) they do (a) long stretch of time like me; I came in as a teenager and came out as a grown man. With business owners that criteria doesn’t exist; you can be an ex-con, you can be anonymous if you choose too. That’s one of the loopholes.”

An advantage Taja-Nia Y. Henderson, assistant professor of law at Rutgers School of Law, believes will not only be beneficial for inmates, but society as a whole.

“Entrepreneurship offers rare opportunity for offenders to employ themselves,” says Henderson. “But at the same time offer people goods and services that can be beneficial to the community.”

Thompson thinks the most rewarding thing former inmates can offer themselves is the chance to erase the mental stigma they carry.

“Don’t wear your felony on your sleeve,” Thompson advises his clients. “No one knows you’re a convict unless you show it.”