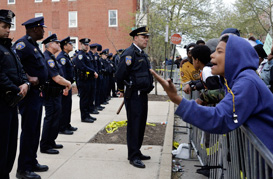 In Valdosta, Ga., according to MaryTurner.org, “Twenty year old Mary Turner, 8 months pregnant at the time and whose husband had been killed in this ‘lynching rampage’ on Sunday, May 19, [1918], publicly objected to her husband’s murder.

“She also had the audacity to swear out warrants for those responsible…To punish her, at Folsom’s Bridge the mob tied Mary Turner by her ankles, hung her upside down from a tree, poured gasoline on her and burned off her clothes.

Such was the fate of many African-Americans in the 19th and 20th century, killed by lynch mobs for such offenses as disputing with White shopkeepers, using profanity, seeking to vote or applying for jobs above their social status in life, according to The African American Encyclopedia.

“While we appreciate the right of our citizens to protest and applaud the fact, to date, the protests have been peaceful, we are very concerned about the rhetoric of the protests,” read a statement from the Fraternal Order of Police Lodge 3.

“In fact, the images seen on television look and sound much like a lynch mob in that they are calling for the immediate imprisonment of these officers without them ever receiving due process that is the constitutional right of every citizen, including law enforcement.”

According to CNN.com, the officers that the statement spoke of are, Brian Rice, Caesar Goodson, Alicia White, William Porter, Garrett Miller, and Edward Nero who were allegedly involved in the death of Freddie Gray after a recent arrest in Baltimore.

Freddie Gray died of a spinal injury one week after his arrest.

Peaceful protests have flooded the city of Baltimore since the death of Freddie Gray, but does calling for the arrest of the six officers in question equal a lynch mob as critics have suggested?

According to The African American Encyclopedia, “By the 1890s, lynch mobs had begun to employ brutal and sadistic tactics against Black victims.  These victims were hunted down, beaten, tortured, and burned at the stake.  Sometimes, lynching victims were dismembered in order to provide souvenirs.  While still serving as a symbol of entrenched racial hatred, lynching was transformed into a recreational spectacle in which White residents brought their families to view the hangings.”

On the other hand, The First Amendment states, “Congress shall make no law respecting an establishment of religion, or prohibiting the free exercise thereof; or abridging the freedom of speech, or of the press, or the right of the people peaceably to assemble, and to petition the Government for a redress of grievances.”

While those protesting the death of Freddie Gray may not be popular to some segments of society, is their behavior more in line with peaceably assembling to petition the government for a redress of grievances?

Or is it similar to those who hung Turner upside down from a tree and cut her unborn child out of her stomach before stomping the fetus?

The answer to the two aforementioned questions may depend on one’s interpretation of the First Amendment and the history of lynching.  What is not up for debate is that Freddie Gray is dead, and those in Maryland owe it to everyone affected to get to the truth, regardless of where the truth falls.