Are We Too Quick to Judge Rape Suspects? 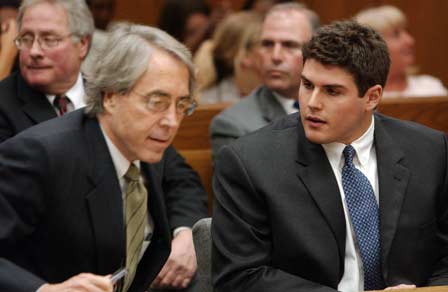 Are We Too Quick to Judge Rape Suspects?

Innocent until proven guilty, that statement has become synonymous within the court of law but it is sometimes nonexistent in the court of public opinion.  Countless men face rape charges every year and consequently endure crucifixion in the media and in the public despite the lack of evidence and sufficient facts.

Kobe Bryant faced rape charges in 2003.  In addition, in 2006, three Duke University lacrosse players, David Evans, Collin Finnerty and Reade Seligmann, endured the same fate after an African American exotic dancer accused them of raping her at an off-campus party.

Before the facts came to light, many had already taken sides, usually along racial lines.  Bryant lost many endorsements and endured vicious taunts by unruly fans.  However, in both cases, charges were dropped and DNA evidence from the suspects was never found on the alleged victim.

Although these two cases received worldwide coverage, many falsely accused suspects suffer in silence, while the real perpetrators are free to attack other women.

According to the Innocence Project, a New York-based non-profit legal clinic, DNA evidence has exonerated 200 people.  In addition, only 10 percent of felonies produce any biological evidence that can be tested for DNA.

Statistics reveal that racial bias is very prevalent in rape cases.  “Only 12 percent of sexual acts are between a victim of one race and an assailant of another, yet 64 percent of the 200 exonerated convicts were Black males convicted of raping White females,” according to Justice Department statistics.

“The most endangered person to be in America is a Black man accused of raping a White woman,” said Barry Scheck of the Innocence Project.

However, the Duke rape case was almost the same situation as the Kobe Bryant case with White suspects accused of raping a young African American woman.  Almost immediately following the accusation, many in the court of public opinion believed the three lacrosse players were guilty and they were labeled “hooligans” by the district attorney, Mike Nifong.

The new district attorney eventually dropped all charges, as in the Bryant case, but the damage to their public image remains intact.

“You can try to move on, but rape will always be associated with my name.  When I die, they will say, ‘one of the three Duke lacrosse rape suspects died today,’” said David Evans.

Fortunately, Bryant and the three Duke students had the financial means to defend themselves.  However, what happens to those who do not have adequate resources to fight these accusations?

Reade Seligmann said, “This entire experience has opened my eyes up to a tragic world of injustice I never knew existed.  If it’s possible for law enforcement officials to systematically railroad us with no evidence whatsoever, it is frightening to think what they could do to those who do not have the resources to defend themselves.”