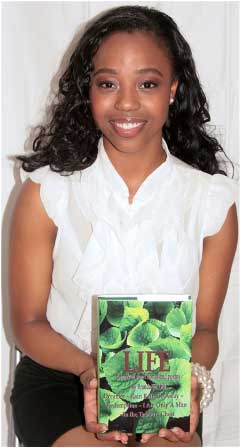 Young Black Entrepreneur on the Rise

Brandalyn Gill is a young Houstonian, performer, poet, aspiring actress and author that recently self- published a book of short stories and poems called Life.

“As a CEO and self-publisher of Illumination Literary Publishing by the age of 18, I’ve experienced the ‘game’ of this industry. It is clear that the African American community at large needs to be touched and inspired by myself and the book,” Gill explained.

Through the passion to want to help mentor and be a positive influence in the community, Gill and those who accompany her have identified 20 middle and high schools within the Houston Independent School District which encompass over 20,000 African American and Hispanic students.

“I discovered that there were very few African American role models my age attending college and becoming an impacting role model and mentor to underachieving students within the HISD system,” said Gill.

The visible factor of the lack of role models settled within her to truly embrace her role as a motivational speaker and developed the “This Is My Life” Youth Development Program.

“Being a motivational speaker was the next step in my realization of reaching young middle and high school students. My impact amazed even me and their response was inspiring,” Gill said.

Gill touches the lives of so many, not only through her motivational appearances, but through the stories that her life entails. This allows her to create a more intimate setting with her audience, allowing them to know that her reason for being this passionate comes from her wisdom gained through the lost figures in her life.

“After my mother physically stopped using all forms of communication with me at 10 years of age, my father a military veteran embarked on his quest to raise me on his own. My inspiration was experiencing real life through the eyes of a child who was never really allowed to be a child, because I had to help raise myself,” said Gill.

Her life story is one of many in the Houston area and through sharing Gill wants to reassure the youth that there is a positive future for those who feel otherwise.

“My book of short stories and poems written from age 10 through 16 was my silent cry, my silent smiles, my silent hardships, and my experiences interpreted in a way others could learn from and use for themselves.”

Gill is the epitome of a modern day community activist set out to change the thoughts and minds of whoever is in her presence.

She wants other entrepreneurs to know valuable information on not only being successful but also being a contribution to your community.

“I would advise them to connect themselves with as much positivity as possible. To find out who they are and what they want in life – based on no one else but their true being – they should hit the ground running, and never look back,” Gill expressed.

She is a true motivator that only wants to see her community as well as the entire world know to not let negative aspects of their life cause it to be the end rather but to let it be the strength to your successful beginnings.