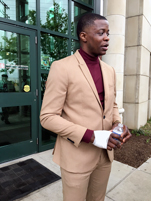 Despite James Shaw, Jr.’s efforts to avoid praise, true heroes like himself deserve all the praise that they receive.

After stopping a gunman who had killed four customers at a Waffle House in Tennessee, Shaw set up a GoFundMe account, with a goal of raising $15,000, for the families of the victims.

Shaw’s goal of $15,000 seems extremely modest considering that, at Regal Mag press time, he has raised over $230,000 to help the families of the deceased and wounded.

“I am overwhelmed,” Shaw said in a statement. “To the thousands of people who expressed their care, prayers and made financial donations, I can only respond by saying, ‘Thank you.’

“Your gifts to the people who lost their lives and suffered injuries mean so much for all who were impacted by this terrible tragedy.”

Tennessee State is thanking Shaw for his heroic efforts by creating a scholarship at the university in his honor.

Tennessee State University President Glenda Glover personally thanked the product of the historically Black college for his “bravery and courage.”

On April 22, Shaw and many other customers had their meal interrupted by violent gunfire allegedly from Travis Reinking, who is accused of firing an AR-15 assault raffle into the Waffle House near Nashville.

Four other customers, including Shaw, suffered injuries from gunshots and shattered glass.

Shaw, who did not want to die and leave his young daughter without a father, rushed the gunman when he stopped to reload his weapon on that fateful April day.

He had been waiting for his chance to subdue the shooter by hiding behind a door before seizing on the opportunity.

After losing his weapon to Shaw, Reinking ran away naked after dropping his coat in the Waffle House parking lot.

The alleged gunman faces four counts of attempted homicide and one count of using a firearm during a dangerous felony.

Reinking will reportedly under go an outpatient mental health evaluation before appearing before the judge for a status hearing in a couple of weeks.

Friends of the alleged gunman said that the crane operator, who jumped from state to state, suffered delusions including his desire to marry pop star Taylor Swift.

Law enforcement officials believe that Reinking would have killed more if it were not for Shaw’s quick thinking and action.

However, Shaw still refuses to call himself a hero.

He said after the hoopla dies down, he wants some alone time and possibly some adventure with his family.

Despite all of the acclaim that has come James Shaw Jr.’s way, one person has not yet reached out to congratulate the reluctant hero.

As of May 7, President Trump still had not reached out to commend or thank Shaw for his actions at the Waffle House last month.

“I haven’t heard anything, but that’s not to say he didn’t try to contact me, or not,” said Shaw.

Despite receiving praise from politicians in Tennessee, Shaw still receives questions about how he feels about not hearing from Trump.

“I know he has a busy agenda, a busy schedule,” Shaw said. “Maybe he just hasn’t gotten around to me. Maybe my time is coming.”

Shaw said, however, that he did not do what he did to get recognition from Trump or anyone else.

“I did what I did and I didn’t really do it for recognition,” he explained.

Talk show host Ellen DeGeneres welcomed Shaw to her show earlier this month, calling him a “brave man” and introducing him to his favorite basketball player, Dwayne Wade of the Miami Heat.

Wade told Shaw, “I know you don’t want to be called a hero, but I look at you as an American hero.”

The future Basketball Hall of Famer then presented Shaw with a check for $20,000.

When DeGeneres then asked Shaw how he felt about people referring to him as a hero, he relented slightly replying: “I don’t have a problem with it. It’s just if you’re in that same situation, I want you to know that a regular guy did it, and I want you to emulate that same thing, and know you have that fire inside yourself.”

DeGeneres asked Shaw what he hopes will happen as a result of the latest United States mass shooting. He replied that he wanted more emphasis placed on mental health help.

Although Shaw started his GoFundMe campaign to help the families of the Waffle House victims, people have begun to support him financially as well.

Journalist Yashar Ali set up a GoFundMe campaign to help Shaw and his young daughter.

Unfortunately for Shaw, he probably cannot escape the hero and brave descriptions, and many people are grateful for that.

In a society constantly dealing with mass shootings and senseless violence, having a true hero gives the media and public a breath of fresh air.

During the summer months, film companies like Marvel Studios and DC Comics release many superhero movies because society has a fascination with the good guys taking down the bad guys.

But true superheroes do not have to have guns or superpowers.

True heroes only have to have courage and the determination to do something positive for others.

To superhero movie fans, watching a true superhero does not require a movie ticket.

To see the definition of a superhero, one only has to Google the name James Shaw, Jr.