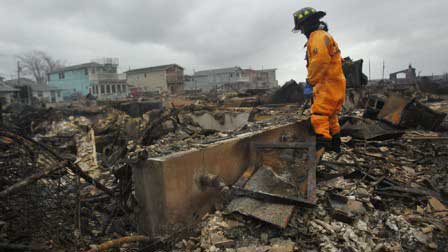 First responders cannot do it alone, as seen after the destruction of Hurricane Sandy.  Community volunteers are essential to real recovery (Photo courtesy of USA Today).

Superstorm Sandy, which was nicknamed “Franken-storm,” spread a great path of death and destruction across the Caribbean and the United States with a major pounding on the economic and social structure of the New Jersey shoreline and New York City, which continues to slowly rebuild from Sept. 11.

However, the community volunteerism that emerged strong in the “Big Apple” following Sept.11 has once again risen to the occasion as people from all walks of life, the haves and have nots, experienced Sandy’s onslaught.

And, as Blanche Dubois stated in the movie A Streetcar Named Desire, “Whoever you are, I have always depended on the kindness of strangers.”

The rise of community volunteerism is most evident following major tragedies when the need for human kindness is at its highest.

However, there are those who believe that community volunteerism and the empowerment and self-determination therein is something that should be ongoing – in good times and bad and that most volunteer efforts have short-term benefits.

According to the article “Purpose, Empowerment and the Experience of Volunteerism in Community” by Adam Fletcher, “When the purpose of service and volunteerism is to strengthen democratic participation and community empowerment, volunteerism can be wholly beneficial.”

He added, “While many community organizations seek to ‘fix’ or ‘heal’ the wounds in our society, it has been often noted that rarely are these works more than band-aids.”

Fletcher, who has been involved with community volunteerism on the local and international levels outlines this premise in the example of an after school activity program that he organized.

“The afterschool basketball program I ran for young people in my neighborhood when I was 21 did help keep kids off the streets. However, it didn’t help their parents get better jobs so they didn’t have to work two shifts…Ultimately, it didn’t help the young people learn more skills or become more involved in their community so they felt a sense of hope and purpose.”

While the need to regain shelter, restore power and recover lost items are top priorities, the importance of long term community volunteerism is essential for building a consistent infrastructure of care and support for all people, especially the underserved.

Dr. Martin Luther King, Jr. said, “I have the audacity to believe that people everywhere can have three meals a day for their bodies, education and culture for their minds, and dignity, equality and freedom for their spirits. I believe that what self-centered people have torn down, other-centered people can build up.”   In the spirit of community volunteerism, the “other-centered” are those who may believe that they cannot contribute much, but often give more in time and resources than any large monetary donation.

The perfect examples are the volunteers who help to build homes with Habitat for Humanity or the doctors who volunteer their time to transform children born with facial deformities with Operation Smile.

As Fletcher added, “The importance of developing democracy and sustainable communities must be spread to all people, including the homeless, the impoverished, and all those regarded as ‘others’ in American society.”

Community volunteerism is a growing movement that steps up during natural disasters and major crises, but the opportunity to infuse the spirit of selfless giving on a daily basis is something that we should all consider.