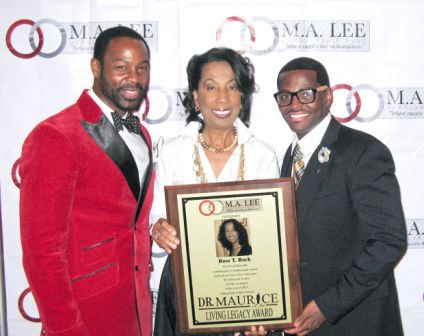 Anyone who has ever spent time around actor and choreographer Darrin Dewitt Henson (“Soul Food” television series) can easily see the parallels between him and legendary actor Paul Robeson.

God blessed both giants with enormous entertainment talent, but entertaining the masses never proved enough for these legendary men.  They used the platform that entertainment gave them to educate the masses on the important issues that negatively affected their community.

Henson has also joined forces with Dr. Maurice A. Lee, a pharmacist and philanthropist from Orangeburg, S.C., and other actors like Brian White to pay their blessings forward by hosting the ninth annual M.A. Lee Scholarship Fund Gala on Aug. 2.

Young high school students applying for the scholarship who think they are facing too many obstacles in life to pursue higher education can look back at our forefathers who are honored at the museum in Detroit, and see a people who faced far greater challenges but still achieved greatness despite the roadblocks.

According to the talented actor, we must know where we came from so that we can use that as motivation to write a better future to our story.

Lee has been adding to that history every year for the past nine years by awarding the annual M.A. Lee Scholarship.

For him, greatness was always on his mind but role models were rarely in his sight since he grew up in a small town in South Carolina.

His role model in the medical profession was the fictional character Dr. Heathcliff Huxtable (Bill Cosby) from “The Cosby Show.”

That example led him to becoming a successful pharmacist, philanthropist and a role model for the younger generation.

Although Lee had his share of naysayers who said “The Cosby Show” was unrealistic and he could not succeed in the medical profession, he saw his destiny even if he did not see physical examples, and that fueled him to reach that destiny.

The Wright Museum is that constant reminder of how rich and successful our history is and hopefully the catalyst that our children need to reach for the stars.

If our children learn the motivational history of our people, they can easily combine that motivation with the financial support of people like Lee and Henson to catapult their life and intellect to new levels.

And we as a community have the ability to help in some form or fashion.

Tickets can be purchased for The Wright fundraiser in Detroit online at www.zanyemusic.com or at the museum’s box office.  General admission is $25 and VIP tickets are only $50 with $35 of every VIP ticket benefitting The Wright.

Tickets for the scholarship gala can be purchased at www.maleescholarship.org.  The gala will be held at 1481 Chestnut Street in Orangeburg, S.C. at 6 PM, with the red carpet segment beginning at 5 PM.