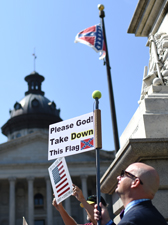 Christian Mergner, of Columbia, S.C., holds a sign during a rally to take down the Confederate flag at the South Carolina Statehouse on June 23 in Charleston, S.C. (Photo Credit: AP Photo/Rainier Ehrhardt).

What They Are Saying About the Confederate Flag

The heinous murders committed by Dylann Roof on nine members of Emanuel AME Church in Charleston, S.C. on June 17 has put increased pressure on government officials and merchants to retire the Confederate flag.

Many see the Confederate flag as a symbol of hate, prejudice and slavery.

However, others see the Confederate flag as a symbol of Southern pride and heritage.

What do some of the most well known Americans think about the controversial debate over the battle flag?

Should it be removed from state grounds and store shelves?

Will removing the flag reduce racism or is it just a distraction from the real issue?

RegalMag.com looks at what celebrities and civic leaders are saying about this debate.

“I seen a lot of people keep it like, ‘That’s our heritage’ or things like that, but if that’s the case you might as well let White people say ‘nigger.’  You know?  That’s also our heritage, and they go hand-in-hand.  The Confederate flag, we were getting called niggers back then, so if that’s what you want to do, then do it.  If you’re comfortable with one, be comfortable with the other, and I’ll never argue with you.  But if you poll 95 percent of people, they’ll say they don’t want to be called a nigger, so stop trying to justify—it’s wrong.  It’s wrong and it’s outdated.  It’s what allows people to cling on to a systematic racism, bro.  It’s not like it’s not hard enough.  Look at how much we have to do to even achieve some semblance of progression.”—OG Maco, rapper

“You know what it is, you know how I feel about that, I’m from the South.  I lived in Mississippi, I done seen a lot of things between racism and Black and White, but we ain’t gonna speak on that because I got 20,000-30,000 fans when I go perform and I look at my crowd sometimes I don’t see nothing but White people.  I’m just gonna be real.  I go to my shows, I see 5,000 people, and they’re all White.  Sometimes I go to the shows and they’re all Black.  But look what Kanye (West) did…He put the Confederate flag on his jacket and…flipped it.  It’s all a mental thing.  At the end of the day if the NAACP wants to do that, I’m a member, I support the NAACP.  Whatever they with, I’m with, but it’s each and every person and how they think.  It’s a mentality.”—Soulja Boy, rapper

“I think all of Hazzard Nation understands that the Confederate battle flag is the symbol that represents indomitable spirit of independence which keeps us ‘makin our way the only way we know how.’  That flag on top of the General Lee made a statement that the values of the rural South were the values of courage and family and good times.  Our beloved symbol is now being attacked in a wave of political correctness that is unprecedented in our nation of free speech and free expression.  Activists and politicians are vilifying Southern culture and our heritage as being bigoted and racist.  We know that this is not the case.  And we know that in Hazzard County there was never any racism.”—Ben Jones, actor, “The Dukes of Hazzard”

“Governor (Nikki) Haley has demonstrated what it means to be a leader during extremely difficult and tragic times for her state and our country.  I commend Governor Haley for her decision to remove the flag from the grounds of the state capitol.  While this is a necessary step towards addressing a divisive symbol of racism in our country, this step will mean little if we do not also honestly confront and discuss the fact these murders were born out of ugly hate and racism.  This is what we must stand against and fight even more than any symbol; it is long overdue that we not only shine a light on and condemn the symbols of hate, but on the haters themselves as well.”—New Jersey Governor Chris Christie

“The cross and the Confederate flag cannot co-exist without one setting the other on fire.  White Christians, let’s listen to our African-American brothers and sisters.  Let’s care not just about our own history, but also our shared history with them.”—Russell Moore, head of the Southern Baptist Convention’s Ethics and Religious Liberty Commission