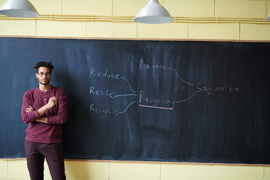 Only two percent of schoolteachers are Black men.

2019 Regal King of the Year Award: The Importance of Black Male Teachers (The Talented Two Percent)

No disrespect to the ladies, but studies often show that when a strong male has a prominent role in a child’s life, it leads to some positive results.

And no disrespect to educators of all races, but often young Black males need to see strong Black male role models everyday instead of the negative images they often see in mainstream media and some inner city communities.

As a result, RegalMag.com would like to award the 2019 Regal King Award to all Black male teachers making a difference in the lives of their students and their community.

The annual Regal King Award is dedicated each year to a Black man or Black men making positive changes in the lives of others.

However, Black male teachers make up only two percent of all schoolteachers.

Cedric Jackson, 41, benefitted from having strong Black male teachers coming up in the 1980s and 1990s after his father sent him to live with his aunt in a rough section of Huntsville, Ala.

Jackson lost his mother when he was 8 years old.

Jackson credits his Black teachers and coaches for pushing him in the right direction, academically and athletically.

Jackson said, “I had a tough life; I would go to school just to eat. Coming up, it meant the world to me knowing that I had these teachers and coaches in my corner. They had the biggest influence on me; they made me feel like I was somebody.”

Although Jackson did not consider himself a committed student, the guidance from educators at Lee High School in Huntsville, Ala. led to him snagging a quarterback position at Alabama A&M University as a true freshman.

Jackson later graduated from Midwestern State University in Wichita Falls, Texas with a degree in Business Administration after transferring from Alabama A&M.

Despite his business degree, Jackson eventually found his purpose in life after stints as a substitute teacher and special education teacher’s aide.

Now Jackson, like many other Black male teachers, is giving back by educating those who came from similar rough backgrounds like him.

“My students know I’m going to push them,” Jackson said. “It doesn’t matter if they’re Black, White or whatever. I try to tell them about the things I’ve learned in life. They’re not looking for someone perfect, they just want someone who keeps it real.”

But in reality, it might be hard for some teachers to keep it real with their students because they may not have much in common with the students they teach.

KIPP.org reported, “Since 2014, ethnic and racial minorities make up more than half of the student population in U.S. public schools, yet about 80 percent of teachers are White and 77 percent of them are female. People of color make up about 20 percent of teachers; a mere two percent are Black men.”

Statistics even show that students of all races benefit from having teachers of color.

KIPP.org reported, “Most education experts agree that all students benefit from a regular exposure to Black teachers, and when present in schools, they are also often perceived as more approachable and voted most popular among students from all backgrounds.

“Still, the exceptionally low number of Black men in American classrooms is not about winning popularity contests; many education experts assert it’s a matter of educational equity, or the lack thereof. It is well-documented that Black students who are regularly cited for lagging behind their White counterparts academically, actually perform better when taught by teachers of the same race.”

In 2017, Johns Hopkins University released a study that discovered having one Black male teacher in elementary school significantly increased the likelihood that a low-income Black student would graduate high school and consider attending college.

For a very low-income Black boy, the high school dropout rate decreased by 39 percent if they had Black male teachers.

“Kids do better when they’re taught by teachers who look like them,” said education professor David Kretschmer of California State University, Northridge.

Kretschmer is one of two directors over the Future Minority Male Teachers Across California Project, also known as F2MTC.

The initiative attempts to recruit, train and keep Black male teachers from elementary to higher education in California.

F2MTC knows that the achievement level of Black students goes up when taught by Black teachers.

Jackson said he does not find the statistics behind Black student achievement surprising.

That’s why Jackson tries to build a rapport with his students, even if that means just cracking a few jokes from time to time.

Jackson said, “I hate to say it, but as a Black male teacher, you always kind of feel like you’re under a microscope, like you have to prove yourself. I think having that experience helps make you a more approachable person [to students] in general. You know what it’s like to feel that pressure. All you want is the best for your students; you just want to see them succeed.”

Although the numbers are small, the impact that Black male teachers make in the lives of their students is gigantic.

Many Black male students said that they did not fully understand how important having Black male teachers were until they got older.

Those positive role models that they might not have had in the home and in the hood showed up in those who handed out the homework, teachers.

For all that they do, RegalMag.com salutes Black male schoolteachers, crowning them the 2019 Regal Kings of the Year.