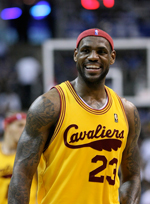 LeBron James began the 2018 calendar year playing for the Cleveland Cavaliers. James has since changed teams, now playing for the Los Angeles Lakers. However, he has never changed when it comes to speaking up for the African-American community.

2018 Regal Kings of the Year: Too Many Kings to Honor Just One

However, 2018 had too many candidates for the magazine to narrow its recipient to just one person.

Therefore, RegalMag.com honors multiple Regal Kings of the Year for the first time in the magazine’s 12-year history.

Some received the honor for their life’s work as activists.

One received the award for acting in heroic fashion when the situation required it.

And one recipient has totally changed the way athletes use their fame, fortune and platform.

So without further adieu, meet the four 2018 Regal Kings of the Year!

James Shaw, Jr.—On April 21, Nashville, Tenn. resident James Shaw, Jr. lived the life of an ordinary man. However, on April 22 Shaw became a real-life superhero. The Tennessee State University alum sat in a Nashville Waffle House when an alleged gunman by the name of Travis Reinking began firing off shots from his AR-15 into the restaurant, hitting and wounding several customers, including Shaw. Reinking killed four during his rampage including Taurean Sanderlin, 29, Joe Perez, 20, Akilah Davis, 23, and Deebony Grove, 21. Throughout the entire ordeal, Shaw could only think of his young daughter and how he did not want her to grow up without her father. Therefore, when the gunman stopped his barrage to reload his weapon, Shaw unleashed a barrage of his own, taking down the gunman and taking his weapon. Reinking ran away from the Waffle House naked. His coat contained more ammunition, so there is no telling how much damage he could have inflicted if not for the heroic actions of Shaw. The hero did not stop his good will at saving lives either. Shaw began a GoFundMe campaign to financially help those who lost loved-ones at the Waffle House that day and to help those dealing with injuries from the shooting. The Alpha Phi Alpha Fraternity member initially intended to raise $15,000. However, as of May, Shaw had raised well over $200,000 for the victims.

LeBron James—Los Angeles Lakers superstar forward LeBron James combines the exploits of Michael Jordan on the basketball court and the boardroom with the activism of the greatest boxer of all time, Muhammad Ali. Thank God. For too many decades, White billionaires held too much control over their millionaire athletes. Fearing that they would lose that paycheck, many White sports teams’ owners held the activism of their African-American athletes in check. But James knows his true power and has taken that power away from owners and given it back to the players. After all, fans pack the arenas and stadiums to watch star athletes in action, not the owners. Therefore, star athletes like James are not just employees; they are the attraction and the product that allow the owners to continue making billions of dollars. James almost single-handedly revived downtown Cleveland as fans packed the restaurants, bars and clubs surrounding Quicken Loans Arena, putting even more money into the pockets of business owners. Los Angeles is now the home of James’ talents on and off the court. He has used his presence in the media via documentaries, television shows and films to shed light on issues affecting the African-American community and to call out racist politicians and team owners who still have that slave mentality. Novelist James Baldwin once boldly told White America that he is not their Negro. In the 21st century, James is doing the same thing. He continues to speak up for the African-American community and refuses to just shut up and dribble.

Marc Lamont Hill—Forget CNN. Marc Lamont Hill is the man. The proud member of Kappa Alpha Psi Fraternity, Inc., former CNN commentator and Temple University professor has worked as a social justice activist for the majority of his 40 years on this planet. Hill sits on the board of My5th, a non-profit organization that educates the youth about their legal rights and legal responsibilities. He also sits on the board and works as an organizer for Philadelphia Student Union. Before joining the faculty at Temple, Hill also taught at Columbia University and Morehouse College. The journalist/professor/activist works with the American Civil Liberties Union (ACLU) Drug Reform Project where he focuses on the drug informant policy. Over the past several years, Hill has dedicated a lot of his time to ending the death penalty. Hill has also written or co-written four books including “Beats, Rhymes and Classroom Life: Hip-Hop Pedagogy and the Politics of Identity;” “The Classroom and the Cell: Conversations on Black Life in America;” “Nobody: Casualties of America’s War on The Vulnerable from Ferguson to Flint and Beyond” and “Gentrifier.” Hill is an anthropologist of education, holding a Ph.D. (with distinction) from University of Pennsylvania, an Ivy League school. The professor’s research centers on “the intersections between culture, politics, and education in the United States and the Middle East,” says his official website.

Shaun King—Writer/activist Shaun King has boldly spoken up for the Black community since his days as Student Government Association President at Morehouse College in Atlanta and probably his entire life. Unfortunately, King received some criticism for getting a story about police misconduct incorrect. However, everyone gets it wrong at one time or another. But that does not negate all of the good things he has done fighting for the rights and dignity of African-Americans. Without the tireless dedication of people like King, the African-American community might be unaware about of all the injustices that our brothers and sisters face daily at the hands of a racist and White supremacist society. Over the past few years, King has written for publications like New York Daily News, The Intercept, Medium and Daily Kos. King took the lead in identifying the White supremacists who attacked men and women at a rally in Charlottesville, Va. in 2017. King’s commentary can be heard everywhere from colleges to prisons to the six million listeners of “Tom Joyner Morning Show.” Before becoming a nationally respected activist, writer and speaker, King used his gifts as a high school civics history teacher in Atlanta. The African-American community is thankful that King has taken his message from the physical classrooms of a high school to the world’s classroom of life.