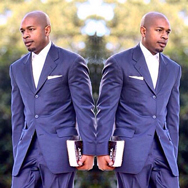 2017 Regal King of the Year Award: Dedicated to the Ministry

Anyone who knew Arturo Frazier over the last 20 plus years, from Baton Rouge, La. to Compton, Calif., probably has the same description of the brother.

A child of God.

Always in a good mood with a smiling face.

Dedicated to his community of Compton, Calif.

Dedicated to the kingdom of Jesus Christ.

According to a 2015 Ballotpedia.org profile, “Frazier is an ordained minister of the Gospel of Jesus Christ.  He has served as a youth pastor in Los Angeles for the past 12 years.  He is also a stylist and fashion consultant.”

Unfortunately, Frazier, 39, died tragically after getting hit by a car on Dec. 11.

Although Frazier did not live to his golden years, his years were still made a gold because his light touched countless people as a youth minister and politician in his hometown and beyond.

For those reasons and many more, RegalMag.com is proud to posthumously honor Frazier as its 2017 Regal King of the Year, an award given annually to an African-American man making a positive contribution to his community.

The Los Angeles Sentinel reported, “A popular preacher in the Los Angeles area, Frazier was born and raised in Compton.  In a Sept. 2006 L.A. Sentinel profile, he revealed that he received his call to ministry during his freshman year at Southern University where he graduated with a Bachelor of Science in 2003.

“At Mount Pilgrim, Frazier directed the church’s Save the Youth Today and Tomorrow program.  He also worked as a liaison for then Councilman Isadore Hall III, a project manager for Los Angeles Urban League, and a field representative for District 62 of the California State Assembly.”

That love for music played a role in his plans for local students when he ran for a school board position in Compton Unified School District (CUSD) because he wanted to be able to recognize talented students and foster their academic growth.

“As a young child in ministry I began playing the drum set at our local church at the age of 8,” Frazier told ArtsForLA.org in 2015.  “I also performed in many Christmas and Easter plays.  The most meaningful experience for me as a child was when I played Jesus Christ during our Resurrection Sunday play.  This (is) meaningful because of my interest at an early age in the story revolving around the death, burial and resurrection of Jesus.”

Although Frazier lost the school board election in 2015, his passion for seeing the children of his hometown succeed was evident in his platform.

In an effort to close the achievement gap, Frazier told ArtsForLA.org he wanted to establish focused tutorial programs for students with low-test scores.

Furthermore, the youth minister desired to establish partnerships with colleges to introduce students to college preparation curriculum with tutors.

Frazier’s purpose in life was to inspire children spiritually and academically, and his legacy will continue even in death.

Click here to check out past winners of the Regal King of the Year Award.