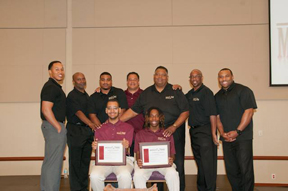 If one pays attention to many mainstream television talking heads, people unfamiliar with the Black community might believe that Black activists only focus on confronting racism.

Critics of movements like Black Lives Matter make it seem like no one in the Black community focuses on fixing some of the internal ills within the community such as providing strong male role models for the next generation.

However, if one knows Cornelius Wright, Jr. and the Houston-based organization he co-founded Mufasa’s Pride, then they definitely will not believe the hype preached by mainstream media.

According to the organization’s website, “Mufasa’s Pride…the pride of my father, is a divinely inspired and formulated community based program for adolescent boys, whereby God entrusted His vision to Hondre’ Outley and as God continued to inspire.  Hondre’ sought the aid of a longtime friend and comrade Cornelius Wright, Jr. to further develop Mufasa’s Pride.

“During the Impact Sessions, these young men are taught such core skills as developing a budget, balancing a checkbook, discovering their purpose, applying for college, practicing etiquette along with social skills and nutrition partnered with exercise.”

Over the years, Wright and Mufasa’s Pride have helped their students get accepted into colleges and vocational training programs throughout the country.

“We push HBCUs (Historically Black Colleges and Universities), but we want them to go to some kind of higher learning,” Wright said.  “Whatever their purpose is, we support them.  We have been on Black college visits on our summer trips.

“We have connections with a welding school, and State Farm Insurance agent Jermaine Phillips has offered summer internships for those who may not know (what) it takes to be an agent.  But you can own your own agency through this program.”

Finding one’s purpose in life comes from a relationship with Jesus Christ for the men of Mufasa’s Pride.

However, Mufasa’s Pride also adds a lot of African culture with its biblical teachings so that the students can get a real sense of who they are as a people.

“Me and a couple of brothers feel connecting and reconnecting to our African culture is paramount to getting our community to where it needs to be,” Wright explained.  “Of course, knowing God/Jesus first, but taking that from an African perspective, and applying it to our daily lives is one answer to the solution for Black people in so-called America.”

One of the biggest problems that many Black men observe from the younger generation is disrespect for women.

So, Wright and Mufasa’s Pride have made chivalry an expectation for the young men that they mentor.

“When I taught elementary school, my boys had to stand when a lady entered the room,” he said.  “It shows a level of reverence.  When boys can view the female’s role at that level, male/female relationships are better.”

How do the young ladies respond to chivalry?

“What I see ladies’ reactions to Black males standing when they enter a room, is of surprise initially, but it then quickly turns into a spark, or a reminder of their self-worth and importance.  You see it in their mother’s faces, especially the elders,” Wright said.

The reaction the young men have as a result of their teachings at Mufasa’s Pride is a spark of commitment towards excellence and knowing their destiny in life.

The organization teaches hygiene and attire as well.

Furthermore, they have also sponsored trips all over the country, allowing the boys to visit historical sights of the Civil Rights Movement and environments that they would not normally be exposed to.

They have sent students to colleges like Howard University, Texas Southern University and Morehouse College to name a few.

Even the small amount of students that have fallen through the cracks at Mufasa’s Pride still have a respect for the leadership provided by the men of this great organization.

When a former fifth grade student went to jail when he moved on to the sixth grade, his family asked Wright to join them for a family visit.

The young man’s counselor asked him to go around the room and say two good things about each person.

Concerning Wright he stated, “He’s fair and he loves to teach.”

That love for teaching goes far beyond the classroom.  But unfortunately, fairness is not something many Black boys receive in this country.

However, because of his tireless dedication, Wright is changing the lives of the next generation of Black men and hopefully leveling the playing field for generations to come.

For that dedication, he is RegalMag.com’s 2015 Regal King of the Year, our award for a Black man changing his community for the better.