2014 Regal King Awarded to Jay Barnett for Commitment to Youth 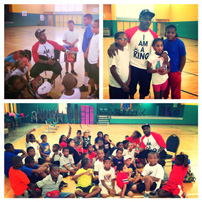 Jay Barnett has dedicated his life to giving back to the next generation (Photo courtesy of Jay Barnett).

In the Christian community, there is a belief whether true or false, that preacher’s children turn out to be the worst of the worst compared to their peers.

Many have spent their entire life under a microscope with people overanalyzing their mistakes and that pressure causes some to rebel against their faith and their life’s calling.

However, for Jay Barnett, ministry and community service is so much a part of his existence, its presence is as necessary as the oxygen that he needs to breath.  And although he initially dabbled with professional football and is a budding actor, there was never any question what his purpose was on Earth.

“I have always had the ability to speak ever since I was a kid,” Barnett explained.  “I was a youth minister at 10 in my dad’s church, (and) after football I (realized) there was a need for effective mentoring (of) the youth.  I took football principles and created a program that would teach, inspire and challenge them beyond the playing field.”

Barnett has been able to challenge them with his outreach programs BeastMode, The MeProject and The WeProject.

BeastMode is a program that works with young athletes on increasing their strength, mentally and physically.

According to Jay-Barnett.com, the five-week program consists of intense, advanced agility building, speed training, life skills teaching and a mentoring session where athletes receive real-life advice that is relevant on and off the playing field.

“BeastMode challenges individuals to work through their mental fatigue by tapping into another realm that allows them to perform beyond tiredness,” Barnett said.  “This translates in life and sports.”

For many, one outreach project would be enough to exhaust a person, but the motivational speaker has obviously used the lessons learned through BeastMode to battle through his own exhausting schedule to continue to give back to the next generation.

Perhaps the greatest gift that Jay Barnett has ingrained into the hearts and minds of his “children” is that they are not N-words, B-words or H-words but kings and queens.

While many other African American men and women in his age group (young adults) use other “terms of endearment” to show respect towards their brothers and sisters, Barnett is famous for referring to his friends and colleagues as a king or queen, which has been rewarding but also challenging.

“Anything that is uplifting is a challenge to implement, especially in the mind of someone who has a negative perspective,” he explained.  “I believe it has been accepted well.  Most kids have never been called a king or a queen.  It has given them hope beyond their circumstance because I give them essentials to understand what it means to be a king or a queen.  I believe any message will be (received) if clarity and understanding are provided.”

He has now taken his message of kings and queens to a larger scale with books like “Finding Our Lost Kings & Queens,” in which he is transparent about his upbringing and the mistakes he made along the way before he discovered the inner king within him.

Furthermore, he is set to release his next book “Letters to a Young Queen” in January 2015 in which he provides hope for the next generation of successful young women.

That message of hope translates to all avenues of Barnett’s career according to friend and fellow thespian Stephen Paul’Astor because he makes himself relatable and approachable no matter what audience he is trying to reach.

As an actor, Paul’Astor believes Jay Barnett has a real presence with dramatic roles and has a knack for portraying the fallen man trying to return to glory.

He has appeared in films like “Signed, Sealed & Delivered” as well as reality shows like VH1’s “Wedding Wars.”

Jay Barnett’s acting colleague also believes being relatable allows him to reach children and adults alike as a motivational speaker.

While many son’s of preachers shun following in their father’s footsteps, Barnett has embraced his calling in life.

His Heavenly Father has directed his path and Barnett has faithfully walked that path with valor.  When asked how he thought God would assess his life’s work thus far he responded, “I believe He would say, ‘this is my son in whom I am well pleased,’ not because I am perfect, [but] because I am fulfilling my purpose, which is God’s will for my life.”