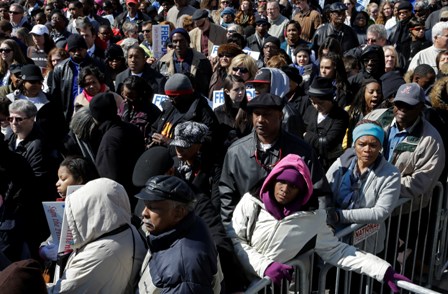 On March 3, 2013, thousands gathered in Selma, Ala. to commemorate the 1965 march, which prompted Congress to pass the Voting Rights Act of 1965 and added millions of African Americans to Southern voter rolls (Photo Credit: AP Photo/Dave Martin).

Poll taxes, literacy tests, proof of property ownership, voter ID laws and now voucher tests have all been described as ways of preventing African Americans from voting since the days of the original 13 colonies.

Although the Voting Rights Act of 1965 eventually did away with most methods of so-called disenfranchisement, the state of Alabama has currently enacted legislation that would require potential voters without a valid ID to pass a “voucher” test in order to vote according to the NAACP Legal Defense Fund.

In essence, a poll official would have to positively identify an Alabama resident or vouch for them in order for them to vote.  The only problem, according to the NAACP, is that most of the poll officials are White and therefore could negatively impact the number of African Americans allowed to vote.

“It is deeply problematic that Alabama’s Secretary of State is trying to resurrect an unconstitutional and illegal relic of the Jim Crow South,” said Ryan P. Haygood, Director of the Political Participation Group at the NAACP Legal Defense Fund.  “Discriminatory voucher tests, which Congress explicitly banned along with literacy tests when it passed the Voting Rights Act in 1965, have no place in modern day Alabama.”

In a letter sent yesterday to Jean Brown, the Chief Legal Advisor to Alabama’s Secretary of State, the NAACP LDF described racially hostile legislative sessions that occurred as a result of new voter ID laws and the burden that voter identification cards and the voucher test will have on millions of voters.

The NAACP believes that the new laws were enacted to violate the constitutional voting rights of people of color.

According to a press release from the NAACP, “Alabama’s proposed rules will likely disenfranchise thousands of voters of color in the state.  Indeed, according to a recent Reuters poll cited in (yesterday’s) letter, 37 percent of White people in Alabama have no acquaintances of a different race.  Thus, many White poll officials will not be able to vouch for the disproportionate number of people of color who lack photo identification.”

Furthermore, the NAACP LDF stated that during segregation many White voters who were acquaintances of Alabama officials were given waivers for the poll tax, a luxury many Black residents of Alabama did not have.

However, many proponents of the new voter ID laws believe that it sends a strong message to residents of Alabama that only registered citizens can vote in elections and that everything is done legally.

“It sends a strong message to our citizens, that we only allow people to vote that are registered voters, that we don’t have people voting illegally,” said Baldwin County Probate Judge Tim Russell.

If residents do not have one of the aforementioned forms of identification, they can go to the county Board of Registrars to obtain a voter ID card.

According to FOX 10 News in Baldwin, Ala., only five people have requested voter ID cards from the Board of Registrars.

The official Baldwin County website reports its population to be 196,000 people.  In 2013, Alabama had a total of 4,833,722 residents according to the United States Census Bureau.

Alabama will hold its next election Tuesday, June 3.