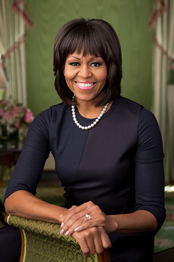 Should Michelle Obama Run for Mayor?

However, he does not want former President Barack Obama back in politics.

He wants former First Lady Michelle Obama to run for mayor of Chicago.

Howery told The Blast that he is excited for “new energy” in his hometown of Chicago since Mayor Rahm Emanuel will not seek a third term as the mayor of the third largest city in the United States.

“As much as I love this job and will always love this city and its residents, I’ve decided not to seek re-election,” Mayor Emanuel said at a recent press conference. This has been the job of a lifetime, but it is not a job for a lifetime.”

Howery hopes that job becomes a job of a lifetime for the former first lady too.

If elected, Howery said, “a lot of great changes would happen” if the former first lady led the city of Chicago.

No word has come from the Obama camp, but Michelle Obama as the mayor would not seem far-fetched.

She served as an assistant to Mayor Richard Daley of Chicago in the 1990s.

Furthermore, she gained political experience while living in the White House during her husband’s eight-year presidency.

Howery said that the Obamas should live in Chicago instead of Washington, D.C.

He went on to say that Emanuel did O.K. during his tenure as mayor of Chicago.

Born Michelle Robinson, the former first lady is a native of Chicago, born and raised on the south side of the city.

Her father Fraser Robinson worked as a city-pump operator and a Democratic precinct captain.

Her mother Marian Robinson worked as a secretary for Spiegel’s before becoming a stay-at-home mother raising her daughter and son Craig Robinson, who went on to become a college basketball coach.

Only 21 months apart, Obama and her brother often got mistaken for twins.

The pair grew up so close-knit that they both slept in the family’s living room with a sheet serving as a makeshift divider.

Their parents saw education as a gateway to success and both learned to read by age four.

Furthermore, the brother and sister both skipped second grade because of their achievement.

Before joining President Obama at 1600 Pennsylvania Avenue in Washington, D.C., she worked as a lawyer, Chicago city administrator and a community outreach worker.

Even in law school, Obama’s involvement with activism was evident as she took part in demonstrations calling for the enrollment and hiring of more minorities at Harvard University.

She met her husband while working at a local law firm, where the future president worked under his future wife as an intern.

The former president and first lady are parents to two daughters, Sasha and Malia Obama.

As the first lady, she focused on social issues like poverty, education and healthy living.

RegalMag.com talked to Chicago residents and Chicago natives who expressed both optimism and skepticism of Obama running for the job as mayor.

Conservative radio talk show host and Chicago native Ken Webster, Jr. said, “If it happened, the campaign would be strikingly similar to Rahm Emanuel’s because he was (President Barack) Obama’s chief-of-staff.

“Of course, Michelle is much more popular with people in Chicago than Emanuel, but they both have similar policy positions and Rahm is really unpopular with folks on the south side where gun violence is so rampant you can practically set your watch to it. Also, Michelle no longer lives in Chicago, don’t you have to live there to run?”

As stated, Howery said that he thinks the Obamas should live in Chicago as opposed to Washington, D.C.

Reports show that crime has increased during Emanuel’s time in office, despite his vow to decrease crime.

The average number of murders per year in Chicago before Emanuel’s tenure was 461.

During Emanuel’s time in office that number increased to 541 per year.

Chicago native and resident Chris Brown told RegalMag.com, “She would definitely need a solid plan to change the city. Chicago right now has a lot of problems that need to be addressed (such as) gun violence, the closing of schools, lack of after school funding.

“Chicago/Cook County has the highest taxes in the country. Where is the money? If she has a solid plan to attack this, then I’m very confident in her.”

Chicago native and resident Latricia London said, “If Michelle Obama ran for mayor of the city of Chicago, I believe our political structure here would definitely shift.

“However, as a resident of the city of Chicago, I would have to see her plan for revitalizing schools, getting rid of the red light cameras, etc. We don’t need another name. We need work to be done. I’m confident she would make a great leader, however.”

As of right now, it seems that the former first lady is focusing her attention on her book promotion tour and not politics.

She will visit 10 cities to promote her memoir, “Becoming.”

The tour hits the United Center in Chicago on Nov. 13, which is also the day the book is released into stores.

The tour wraps up on Dec. 17 at the American Airlines Center in Dallas.

Former President Obama also has a memoir in the works.

No release date has been set for the former president’s book, but it is expected sometime in 2019.