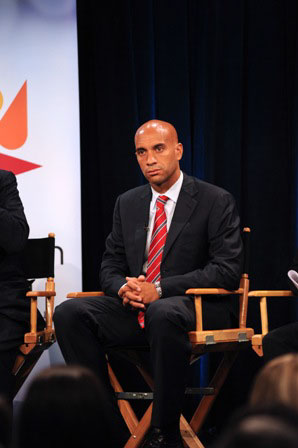 Defeat of popular Washington, D.C. mayor seemingly puts an end to a once promising political career (Photo by NBC/NBC Newswire via AP Images).

Adrian Fenty; How His Losing Campaign May Help Others

Merriam-Webster’s dictionary defines arrogance as “an attitude of superiority manifested in an overbearing manner or in presumptuous claims or assumptions.”  This is one of the terms that were used to describe why Adrian Fenty was not re-elected as mayor of the nation’s capitol.

As we approach a major mid-term election period, questions are being raised about a number of local, state and national campaigns.  In some locations, the primaries decided the next elected official because of the party numbers. In other areas, the decision will go down to the wire and, as is the case with some close calls, may be determined by court decisions.

Those in the early races have already experienced either the “joy of victory” or suffered from the “agony of defeat.” Such was the case in the mayoral election with the young incumbent in Washington, D.C.

From such a promising start, former Mayor Adrian Fenty made some critical mistakes, including a perceived arrogant stance and seemingly he forgot that accomplishments are one thing, but knowing the pulse of the people is the main key to victory.

According to many reports in local publications, including the Washington Post and others, Adrian Fenty initially won the mayoral election with an overwhelming majority from White and Black voters in a campaign that was deemed to not be “defined by race, but by a discussion that included competence, government efficiency and best practices.”

He brought many positive ideas to “The District” and was able to maintain the support of the White community. Unfortunately, the broad base and post racial momentum that got Fenty elected began to dissipate with many in the Black community who felt that he was not catering to their needs, particularly in the area of job creation and remembering his support base.

“You have to keep your eyes and ears on the pulse of the community and to maintain your connection to the needs of your constituency,” states James A. Garner, former mayor of the Village of Hempstead, N.Y. “The ones who elected you are the ones you have to serve as their elected official.”  Even as he approached the primary with significant achievements under his belt, he apparently disregarded warnings and reports that he was coming across “aloof and uncaring.”

Whether it is an arrogant air or just an ignorance of the needs of the public, many Black politicians should heed the warning signs and re-trace their steps to victory as they approach re-elections or the “one term and out” chant will cause another dearth of Black leaders in government houses across the country.

“The role of the politician today, especially Black politicians, if we are to learn anything from the loss experienced by Adrian Fenty and Artur Davis in Alabama is to not take your base for granted,” adds Garner. “Clearly, the Black vote made a difference in both of those elections and the voters did not feel that their officials were representing their interests, so they were voted out.  That speaks volumes for those who do not think that the Black vote should be taken seriously.”