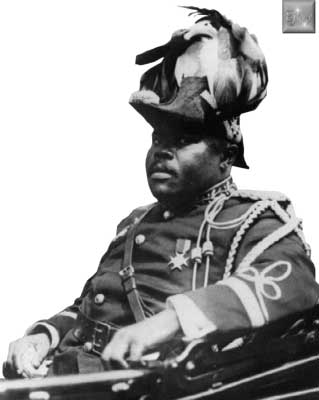 Marcus Garvey and Jack Johnson: Strange Bedfellows in Pursuit of a Pardon

There are some discussions in Washington D.C. that seem to have equal support from “both sides of the aisle,” which is rare.

While most people continue to hope for bipartisanship regarding economic recovery programs, there are many in the African American community who are banking on those politicians who have put their differences aside to speak about righting two historic wrongs via a presidential pardon.

In this case, it would be posthumous pardons for leading human rights advocate Marcus Garvey and athletic great Jack Johnson, both of whom were victimized by the racist cultures of their day,  and should have their reputations restored so that their unique legacies can be fully appreciated.

From his early days experiencing discrimination in his home country of Jamaica, Garvey set out on a journey to encourage Black people to come together and support each other.

This visionary had the ability to organize and mobilize the Black community and his journalism experience helped him to spread a message of uplift to Blacks in America and abroad.  He started the Universal Negro Improvement Association (UNIA) in Jamaica in 1914 after traveling the world chronicling the plight of Blacks.

However, when he incorporated UNIA in 1918 in the United States in New York’s emerging Black Renaissance neighborhood Harlem, it took off with a reported attendance of 5000 at one meeting and fundraising at its peak.

By the end of 1919, he was established as an advocate for the rights of the oppressed, especially Blacks in the global diaspora.  He fostered a “Back to Africa” movement that would return Blacks to their African homeland to build their own economic empires.

While his business outreach and Black empowerment efforts were the foundation of his mission, he is best remembered for his parades through Harlem dressed in full regalia to highlight his fundraising endeavors.

One of his entrepreneurial visions – with a tie to his “Back to Africa” vision – led him to establish the Black Star Line to build a shipping enterprise and showcase Black ownership.

As Garvey’s prominence rose, so did the government scrutiny against the growth of his movement. Many claimed that the government planted people within Garvey’s movement to aid in his downfall. These actions, coupled with Garvey’s limited business savvy and dependence on other unscrupulous business associates, caused him to be singled out and he was convicted of mail fraud in 1923.

It was clear that the trial and sentencing was racially motivated, but the mood of the times reflected a growing discontent within the White community regarding successful Blacks.

In keeping with the historical perspective, the early 1920s reflected a period of unrestrained violence against Blacks, particularly those who seemed to be doing well and in some cases, better than their White counterparts.

In 1921, a race riot leveled  “Black Wall Street”  in Tulsa, Okla. and 1923 marked the year that Blacks ran for their lives from the enterprising community of Rosewood, Fla.

Clearly, a Black man who could raise money and awareness within an emerging community such as Harlem, N.Y. had to be stopped. Despite his unsuccessful efforts to have the charges overturned or to be pardoned, Garvey’s sentence was commuted by President Calvin Coolidge and he was deported to Jamaica where he continued to advocate for human rights and to clear his name until his death in 1940.

A former Jamaican prime minister led the way to seek a pardon from President Ronald Reagan that also proved unsuccessful.  Many supporters felt that President Barack Obama would be more understanding.

Unfortunately, the high cost for a pardon was ruled as the prevailing rationale for denying Garvey’s descendants the opportunity to have their ancestor’s name cleared and his legacy truly appreciated. 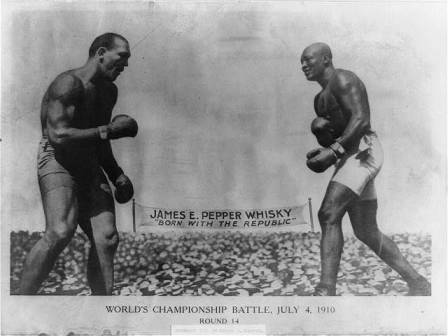 On the other hand, from the speaker’s platform to the boxing arena, we have “strange bedfellows” assembled in support of Johnson’s posthumous presidential pardon.

With support coming from Republicans including Senator John McCain (Ariz.) and Congressman Peter King (N.Y.) and Democratic Congressman Charles Rangel (N.Y.), one would think that this would be a sure decision just because it has brought together three politicians who are usually at odds with each other.

Johnson became the first Black heavyweight champion in what was billed as the “Fight of the Century” in 1908, a century before President Obama was elected the country’s first African American president.  In just three short years after his athletic feat, he too became the target of a society that had its own view of Blacks in America and knew how to get to those who “did not keep their place.”

Johnson was convicted in 1913 of violating the Mann Act for allegedly “transporting White women across state lines for immoral purposes.”  He was resented for his athletic prowess and flashy lifestyle that included romantic liaisons with White women, which was taboo.

Johnson’s bravado set the stage for the careers of Joe Louis, Muhammad Ali and other Black boxing greats.  He showed skill and intelligence in the ring and defeated the well touted White boxers.

However, social mores of the period were not in sync with the charismatic Johnson who lived life to the fullest; so the powers that be moved swiftly to disgrace him through racially motivated actions and unjust laws.

Johnson, who fled the country after his conviction, returned to serve a 10 month sentence. Attempts to revive his career failed when he was released from prison and he died in 1946 with the stain of his conviction leaving family and friends unable to proudly speak about his professional accomplishments.

The resolution urging President Obama to pardon Johnson moved swiftly through both houses of Congress earlier this year, after five years of effort to get it to that point, with McCain, King and Rangel all equal in their commitment to seeing it through to signing in the Oval Office.

Unfortunately, it also bit the dust at the door of the Justice Department that deemed it an unnecessary expense as both parties are deceased; questioning what would be the benefit for such an action.

Supporters for both men continue to challenge this rationale due to the historical importance that both Garvey and Johnson bring not only to the Black community, but to human rights and social justice for everyone.

In this era of apologies for past wrongs and commissions to determine how to deal with racial differences, a presidential pardon is another means to correct extreme injustices.

A presidential pardon should be granted to those who have indisputable proof that a grievous injustice has been placed upon them, especially by the government that was established to protect the rights of all its people, whether they are dead or alive.  Garvey and Johnson both meet that criteria and, for once, the Republicans and Democrats agree!