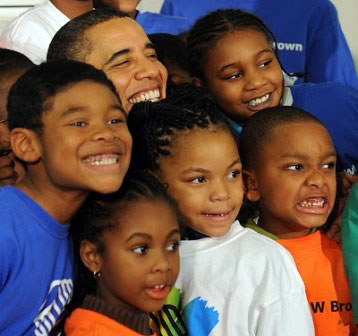 President Barack Obama is still a source of pride for many in the Black community, especially children.

Although many may not remember the date, Nov. 4, 2008 is a day that most Americans of our time will never forget.

Either immersed into feelings of disappointment and anger or propelled into acts of rejoicing and celebration, this day was a monumental day. It was the day that the United States of America astonishingly elected our first African American president, President Barack Obama.

Joined by his splendidly talented wife, Michelle, and his two adorable daughters, Sasha and Malia, President Obama was elected for a plethora of reasons from various persons.

However, what he was known for, besides his celebrity friends and basketball skills, was his slogan: “Yes we can!” This slogan, like the former presidential candidate, radiated a hope for change in our country. A change for better. Not worse…

Our dear president was the talk of the town for a long amount of time while he was yet in his beginning stages.

Black grandmothers loved him. Black children wanted to be him when they grew up. And, Black men and women that never saw America as equal began to gain a somewhat different perspective.

But, three years later we must a look at the condition of Black America after Barack Obama took his position officially.

According to the latest poll conducted by NBC and The Wall Street Journal, African Americans are still standing by their president even after Barack Obama has been through the fire with so many other citizens of America.

With an approval rating of 92 percent, President Obama is still seen by his African American constituents as suitable for the grand position and beneficial for our communities.

When asked if he thinks President Obama has done a job well done for our Black communities, one Black man, 67, stated, “He has done a lot more for this country than some past presidents. And, even through after [Barack Obama] went through the ridicule of the Republicans, he still remains true to what we, the people, want.”

Another Black woman, 45, agreed saying that she felt like President Obama “really cares about us.” Our communities are concerned about equality, the need for education, issues derived from poverty, the lack of healthcare, etc.

With the health care system he passed, The Race to the Top educational challenge, the evacuation of our troops from Iraqi soil, the overturning of the “Don’t Ask, Don’t Tell” policy within our military, our president has more than proven himself to America, let alone the Black community.

However, not every Black individual approves of the work done after Barack Obama became president. A Black woman, 67, explains why she is disappointed in our president. She says, “He made us believe in him. But, there are still families with no money and no jobs in our own communities. Even though he’s half-Black, he never addresses our community specifically. It’s like he doesn’t want the to lose his vote with the White community. I want him to mention us when he speaks.” Like a lover that only slips by at night, President Obama makes sure that he doesn’t speak specifically about the Black community too often. This rubs some Blacks the wrong way.

“He says that he cares about us. But, some of our neighborhoods are deteriorating slower. Our kids are dying faster and our elderly are still impoverished. What is he going to do about that? I think that after Barack Obama became president, he got lazy about the Black community because he knows that we will have his back no matter what,” one Black woman, 30, states.

As always, everyone will have his or her own opinions about our president. He is neither Batman nor is he the Joker. He is neither the hero nor the villain. Our president is only one man with a huge job ahead of him even after three years.

Whether your opinion on President Barack Obama is good or bad, the fact that he is our president shows that he is worthy of our attention and respect at the very least.

Three years after Barack Obama: The Man made the transition to Barack Obama: The President, he is still seen as a beacon of light for our sometimes-darkened communities and restored hope to an almost hopeless generation in the Black community. Through his good and bad decisions, the best thing we can do is pray for his strength and wisdom.