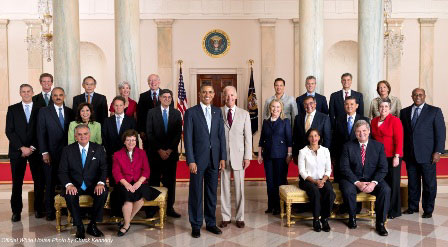 President Obama’s cabinet is being criticized for a lack of diversity (Photo courtesy of WhiteHouse.gov).

President Barack Obama is receiving a lot of flack over the past few weeks by the media and from his African American supporters because of his recent cabinet appointments.

Their criticism stems from the lack of diversity in his cabinet, as all members selected thus far have been White men and women, as opposed to ethnic minorities.

Rep. Marcia Fudge, who chairs the Congressional Black Caucus, recently sent a letter to the president expressing her concerns about the situation.  Not to mention many of his African American supporters like Texas Southern University business major Michael Thomas who has been dedicated to the president during both campaigns.

“It’s quite alarming,” Thomas said. “I would have loved to see him appoint a few African Americans as his top advisors since we are the main reason why he is where he is now.”

The White House responded last Tuesday, suggesting that people hold off on the criticism until the entire process has been completed.

Uba Okereke, a graduate student at University of North Texas, agrees and is optimistic that United States Ambassador Susan Rice is likely the president’s next selection.

“To be honest, Susan Rice could be the next Director for the National Security Agency,” Okereke said. “So I’m not too upset.  Obama is doing the best that he can.”

So far, Obama has named White men and women to oversee the departments of State, Treasury, Defense, Energy, Interior, as well as the CIA, Environmental Protection Agency, and the Office of Management and Budget.

Still, not all of his African American supporters are concerned with the race factor. Business Development Rep. Gerron Rose is focusing on the bigger picture.

“Appointments are and have always been strategic,” Rose said. “Most African Americans only see a Black president. I just see (a) president. His choices support his platform and beliefs and the only thing that matters is getting the job done, regardless of race.”

President Obama’s first term cabinet appointees featured seven women, and nine racial and ethnic minorities. It was the most diverse group ever assembled according to some experts.

Bill Clinton, the last Democratic president, had five women and six minorities in his first cabinet.  It was one more in each category than former President George W. Bush had.

Obama’s first term picks were also diverse in age. Seven members were in their forties, eight in their fifties, and six in their sixties.

However, there are some African Americans like Texas Southern University grad student Curran Williams who are not too concerned with the president’s choices and thinks the president is simply choosing the most qualified candidate.

“I was not personally offended,” Williams said. “I guess the president could not find enough African Americans worthy or qualified for the position.” Williams also added that the president’s selections upset many in the Black community as they felt he owed it to them for all of the support they’ve shown throughout the election.

There is still reason to be optimistic. The president has stated numerous times about how committed he is in adding some diversity, and about how diversity improves decision making, because different cultural groups coming from different backgrounds leads to different perspectives.

Obama still must name new heads for the departments of Labor, Commerce, and Transportation.