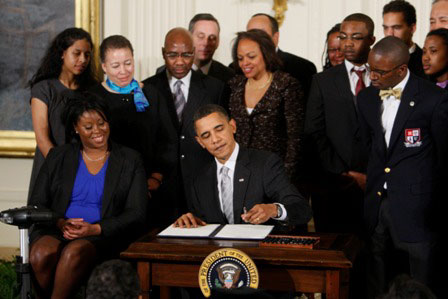 With President Barack Obama’s “My Brother’s Keeper” initiative receiving a lot of attention, many missed another similar initiative focused on young African American men that is making waves in Washington D.C. The White House Initiative on Historically Black Colleges and Universities (WHIHBCU) has ramped up events and partnerships in the first three months of this year.

The events are doubly important given the fact that while Morehouse men flanked the president during his initial My Brother’s Keeper speech, HBCUs and other historically Black institutions were not initially included in the planning process for My Brother’s Keeper. WHIHBCU is now changing that.

There are currently 106 HBCUs in the United States including the famous Morehouse College, Spelman College and Howard University.

HBCUs have been around for more than a century as the first, Cheyney University of Pennsylvania, was founded even before the Civil War in 1837.

In 1980, President Jimmy Carter created the WHIHBCU to “overcome the effects of discriminatory treatment and to strengthen and expand the capacity of historically Black colleges and universities to provide quality education.”

To continue this mission in 2014, the White House is hosting events around the country.

The “HBCUs 2020: Plotting the Path through HBCUs for African American Males” event took place in Charlotte, N.C. The event was sponsored by WHIHBCU in collaboration with members of the Congressional Black Caucus and the Urban Education Collaborative.

At the event students, educators, policy makers and others discussed strategies for increasing higher educational opportunities for African American males at HBCUs. Federal officials also focused on providing information on how to access federal support programs and offerings.

“It is critical that all students have access to opportunities that prepare them for success in the global workforce,” said Otha Thornton, president of the National Parent Teacher’s Association, who was also a panelist in yet another White House sponsored program, the first ever Morehouse College 2014 Black Male Summit, which took place March 28-29.

The summit included “a candid conversation about the challenges and opportunities facing young men of color” and David Johns, executive director of President Obama’s African American Educational Excellence Initiative, and Ivory Toldson, deputy director of the WHIHBCU participated in panels.

Similar summits are planned for Mississippi, California and Philadelphia.

While there is much talk about helping young Black men, the White House is also focused on encouraging them to help themselves.

Corey Hardiman, a senior Morehouse student, is one example.

“I wanted to have a big house with the white picket fence, but the vision all changed with the influence that I had here under the leadership here at Morehouse,” Hardiman said. “They kept saying that you owe your community, and I listened.”

After hearing Obama speak at Morehouse’s commencement ceremony last year, Hardiman increased his work on his own grassroots organization in his community of Roseland, one of the most disenfranchised neighborhoods in Chicago.

During the HBCU 2020 and Morehouse summits, there were many mentions of WHIHBCU’s All Stars program that recognizes the work of students like Hardiman.

So far, the program has recognized 75 high achieving students at HBCUs.

“Engaging with the next generation of leaders who will graduate from HBCUs and go on to make meaningful contributions to society is crucial to the success of our community, our country and our global competitiveness,” WHIHBCU executive director George Cooper said in a statement.