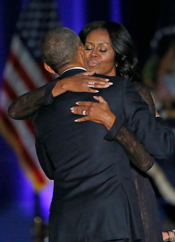 Outgoing presidents usually do not leave the White House with high favorability ratings, especially if the opposing political party takes their place.

Former President Barack Obama is no different with an outgoing favorability ranking of 58 percent, according to a Gallup poll released on Jan. 16.

However, former First Lady Michelle Obama remains popular with a favorability ranking of 68 percent, according to the same Gallup poll.

So what makes the former First Lady so popular and beloved by most Americans?

Grace, class and elegance immediately come to mind when discussing the former First Lady, even in the midst of vicious racist attacks by critics for the last eight years.

In addition to being class personified, Obama also was about action during her eight years in the White House.

Obama dedicated her White House tenure to tackling childhood obesity, supporting the military via wellness, educational and employment opportunities, encouraging higher learning for all young people and encouraging young girls to reach for the stars in their future careers.

In 2009, Obama cultivated a garden at the White House to bring attention to healthy eating.

According to WhiteHouse.gov, “At the start of Let’s Move!, President Obama established the first ever Task-Force on Childhood Obesity to develop a national action plan to mobilize the public and private sectors and engage families and communities in an effort to improve the health of our children.”

Let’s Move! also increased access to fruits and vegetables at school, “providing 3 million students with a salad bar,” according to WhiteHouse.gov.

The campaign also promoted 60 minutes a day of physical activity at school to help fight childhood obesity with daily exercise.

With Obama’s effort to assist our brave soldiers, her initiatives led to employers hiring or training over 1.2 million veterans and military spouses; over 900,000 military spouses gained employment via the Military Spouse Employment Partnership; and she launched a mental health public awareness campaign for America’s brave heroes coming home from combat.

Through her Let Girls Learn campaign, she took her mission of female empowerment and excellence throughout the country and abroad to young girls needing strong role models and mentors.

According to her official White House bio, “In March 2015, the President and First Lady launched Let Girls Learn, an initiative which brings together the Department of the State, U.S. Agency for International Development (USAID), the Peace Corps, and the Millennium Challenge Corporation, as well as other agencies and programs such as the U.S. President’s Emergency Fund for AIDS Relief (PEPFAR), to address the range of challenges preventing adolescent girls from attaining a quality education that empowers them to reach their full potential.”

Despite all that Obama accomplished, what young girls really got to see from her, other than realized potential, is what it means to be classy, intelligent, original and graceful.

Those attributes will truly be missed but definitely not forgotten.  Thank you First Lady Michelle Obama!