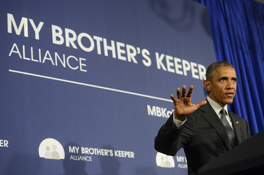 President Barack Obama speaks at the launch of My Brother’s Keeper Alliance at Lehman College in The Bronx, N.Y. on May 4, 2015 (Photo Credit: Susan Watts/The Daily News via AP, Pool).

Although President Barack Obama receives criticism from some for not doing enough for the Black community, that criticism turned to praise in the community when he launched My Brother’s Keeper in 2014.

According to a 2014 RegalMag.com article, Obama launched the organization as a means “to help men of color find employment through foundations, businesses and community groups.”

The question two years later is, how successful has My Brother’s Keeper (MBK) become and how much work remains?

Golden State Warriors forward Kevin Durant has signed on as an MBK mentor because he knows the importance of mentors, and the positive affect those role models have had on his life.

“Every kid deserves an opportunity to succeed,” Durant said.  “Unfortunately, every year, over six million children miss at least a month of school, putting them at significant risk of falling behind and not graduating from high school.

“And one of three kids grow up without a mentor.  By supporting My Brother’s Keeper and the Success Mentor Initiative, I’m proud to help change those statistics so that all kids have the support they need to make sure they are in school and can reach their potential.”

According to WhiteHouse.gov, since the inception of MBK, over 50 more communities have accepted the MBK Community Challenge.

Furthermore, independent private sector grants have eclipsed $600 million and “more than 80 percent of the recommendations the MBK Task Force sent to the president two years ago are complete or on track.”

Despite the success of My Brother’s Keeper, many critics believe that unless America changes the circumstances that have forced many Black and brown people into at-risk communities and situations, very little change will occur.

“You can say that people are fully responsible for their choices, and that’s where we should turn our attention,” said Jamelle Bouie of The Daily Beast.  “But choices aren’t made in a vacuum, and if Anacostia is a place where people…choose to sell drugs, buy guns, and kill each other it’s because we made it that way.  Put simply, history matters. And the only way to truly change the odds for these kids is to take that into account.”

It is no secret that Black men account for a large portion of the prison population.

It is no secret that many Black children grow up in single parent homes.

It is no secret that there are not many jobs and opportunities for Black men from the inner city.

And it is no secret that the drop out rate for Black high school students is excessively high.

However, it might have been a secret until Ava Duvernay’s Netflix documentary “13th” that the exorbitant amount of Black men in the penitentiary, and the stereotype of Black men as violent criminals, was created as a means to enslave Black people again during Reconstruction in order to help rebuild the South free of charge.

Many critics like Bouie believe unless that fact is addressed, we cannot put the responsibility on the Black community entirely.

Nevertheless, the results of MBK are encouraging.

“In Compton, (Calif.), to address the safety issues in the city that stemmed from gang violence, Mayor Aja Brown convened more than 60 ex-gang members from rival neighborhoods to call for peace…Since the creation of Compton Empowered, some 30 ex-gang members have completed a series of leadership development courses, 13 have been hired to participate in the city funded Gang Intervention Program, and the city recorded a decrease in homicides of nearly 50 percent from 2014 to 2015.”

So as Obama’s presidency comes to a close, he deserves much credit for making an effort to address a demographic that has been somewhat ignored by his presidential predecessors.