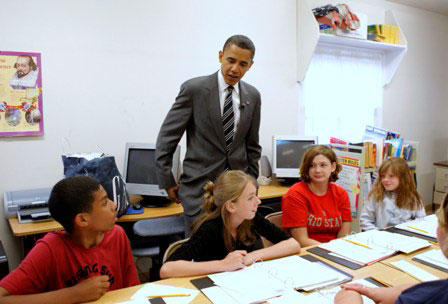 The Obama Effect and its Meaning to Young African American Males

On Nov. 4, 2008, Americans and much of the world was astounded as a man from Illinois approached the podium alongside his wife and daughters. Dozens of others had walked this seemingly endless journey; however, none made such an impact as the young man who would be elected 44th President of the United States.

The jury was in: an indelible “Obama Effect” had taken hold of the psyche of Americans everywhere.

Barack Obama, of African descent, affected American politics in a way never before seen. Across the country voters turned out in droves; volunteers went door-to-door distributing handbills and registering folks who had long given up hope of ever seeing an African American living in the White House. The strategy worked. The campaign brought energy, efficiency and effectiveness to the forefront, and the election proved a significant milestone in American history. Leaving the world flabbergasted, the Obama Effect was in full swing.

Today, less than two years later, however, polls indicate that the Obama Effect might be waning, with the President’s approval rating at a mere 48 percent. But another not-so-small yet often overlooked demographic – one not concerned with nationwide polls – recently expressed their views of President Obama’s leadership.

Not for adults only, the Obama Effect apparently has taken root in the minds of young African American men around the country. A handful of those young men (ages eight to 14) recently expressed those views regarding President Obama’s presidency, what his presidency means to them, and what they believe the future holds for them as Americans of African descent.

Youth and the Political Structure

Today’s African American youth are more politically-savvy than one might think. No longer satisfied with manual gadgets, this generation is ultra-wired to the world through their iPods, cell phones and, yes, their Wii. This might explain how, in 2008, the charismatic then-Senator Obama gained much of the advantage over his opponent, Senator John McCain, at least in part, because of utilizing the Internet at an unprecedented degree.

In short: these kids know their stuff. Case in point, when asked what he thought the phrase “Obama Effect” meant, 14-year-old K. Taylor responded, “It means how I feel about him [Obama] being our president.” Taylor went on to say he “feels great” with Obama as President because “…there’s somebody out there, who’s important, and looks like me.”

Children do not come to these types of conclusions on their own. Parents play a keen role in children’s perception of politics and life in general. In spite of what adults might think, children pay close attention to the things parents say, as is evident in 11-year-old J. Turner’s comment pertaining to the Obama Effect.

“My mom said that he did something no one else has before and that we [African Americans] should strive to be better too,” Turner said.

Parents must take an active role in persuading their children to understand and share an interest in politics. And African American parents owe it to their children to help them see the importance – and benefits – of the Obama Effect in their own lives.

Obama, The Man Behind the Presidency

Contrary to media hype, today’s African American youth are actually quite intelligent and insightful. In describing President Obama, one pre-teen called him “very smart” and noted that “he speaks well.” Adding to that comment was 14-year-old K. Taylor who interjected, “He seems like he really wants people to do better…and he means what he says.”

Nine-year-old J. Griffin was more to the point. When the group was asked if it mattered that President Obama was a Black man, he stated: “Not really, because I think President Obama is better for Black people and White people. It’s like he wants to help everybody more.”

Eight-year-old Q. James said, “I think he cares about all people, not just Black people and not just White people. All people.”

Cutting more to the chase, K. Taylor drew comparisons with former President George W. by saying: “Obama is not like President Bush. He cared a little bit about people, but then he started the war in Iraq and Obama is trying to end the war in Iraq.”

One 11-year-old said he believes the White presidents cared about Black people, “but not as much as President Obama,” who D. Douglas then added, is “more aware of Black people.”

Addressing President Obama’s ethnicity, J. Griffin said that the President had to be fair to all people because “his mom is White, and if he wasn’t it would insult his mom.” Then he added that “President Obama has to care about everybody because they’re all in his family.”

Looking Ahead to the Future

If the discussion is any indication, the Obama Effect is still alive – and will be for many years to come.

When asked what the President’s example has taught them, 9-year-old D. Douglas answered, “I think I can do anything I want in life.” And J. Griffin admitted, “I might not want be president, but I can do what I want.”

And 11-year-old J. Turner, though not sure of reaching presidential status, still looks to the future with hope. “I would like to be president someday but I’m not sure I’ll make it. But I can at least try. President Obama showed us that it can be done.”

“I think I can have a bright future as long as I study hard and go to school like President Obama did,” said 14-year-old K. Taylor.

Two things are clear: The Obama Effect, while perhaps waning in the hearts of adults, is alive and kicking in the hearts and minds of African American males in America; and indeed, kids do say the darndest things.