Does Obama Owe Community a Pardon of Black Political Prisoners? 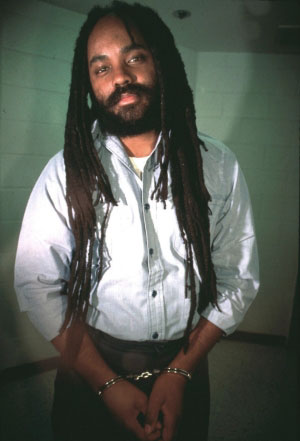 Many activists believe pressure on government is the only way to free political prisoners like Mumia Abu Jamal (Photo Credit: BET.com).

Last week Herman Wallace, a former Black Panther known for organizing inmates in support of the racial integration of the Angola prison in Louisiana, was released from prison after spending over 42 years in solitary confinement.

Wallace was suffering from terminal liver cancer, but the state of Louisiana still defied a federal court order for his release.

Federal Judge Brian A. Jackson, who overturned Wallace’s conviction, had to threaten to hold Louisiana in contempt in order for the state to finally release him, and Wallace died just three days later.

Wallace is the most recent in a continuous string of current, past, and would-be Black political prisoners to make the news.

Earlier this year, former Black Panther Assata Shakur who has fled to Cuba, became the first woman to be placed on the FBI’s most wanted terrorists list.

The documentary “Free Angela and all Political Prisoners” made headlines earlier this year as it debuted in box offices around the country.

And in 2012, Mumia Abu Jamal was removed from death row after almost 30 years into the general prison population.

Within that number, there are countless Black political prisoners fighting for freedom.

Lawyers, family and community members reviewing trials and court evidence, believe many of these prisoners were innocent to begin with.

Others, like Steve Downs, Executive Director of the National Coalition to Protect Civil Freedoms, point to “preemptive suspicion” as a reason many Black political prisoners were arrested.

Still, others fighting for their release say sentences have been extended or they are being denied parole based on their political ideologies.

“The thing I noticed quickly is that all the Black revolutionaries from the 60s and 70s got killed or are in prison,” said Preach, an organizer with Occupy the Hood who helped plan a celebration and protest in Washington D.C. for Mumia Abu Jamal’s birthday last year.  “What society or the (U.S.) government tends to do is show they can silence anyone who speaks out against the government and that’s exactly what happened with our leaders.”

President Barack Obama has issued 39 pardons so far during his presidency and had denied 1,019 applications as of March.

Most organizations fighting for the release of Black political prisoners have applied for pardons and hope they will be among those freed by the president before his term is over.

Black political prisoners were targeted individually and as a group by the FBI Counterintelligence Program and state and local law enforcement.

There were political assassinations, set ups, infiltration and plots that pitted groups against one another.

Lives were lost, families were destroyed and our community and leadership were devastated.

Pardons are the least the president can do to begin to atone for this nation’s sins according to Richard B. Muhammad, editor of The Final Call newspaper, which serves the Nation of Islam.

While applications have been sent in, many are also petitioning the president to pay more attention to these pardon applications.

One petition written in April of this year on change.org  states, “I’m asking for a complete pardon of Mumia Abu-Jamal. Mumia has been in prison for the last 30 years for a crime that is still to be proven. The abundant corruption in Mumia’s first case was clear enough to get the initial death sentence reversed to life in prison. I feel like now is the chance to finally give Mumia the justice he deserves.”

It has received over 100 signatures, its initial goal.

But most of the people fighting for the release of some of the countries most prominent Black political prisoners are not holding their breath for the first Black president to issue a pardon.

While petitions for pardons are still being pursued, activists say they recognize that most of President Obama’s pardons have been to low level drug offenders, and it has been very rare for any president to pardon a high profile prisoner.

“Even though I would like Obama to do something to pardon them, he is part of the establishment, so (freeing political prisoners) is really on the people,” said Preach “In terms of them being released, its hard to think it will come from the government when you’re talking about a government that is sponsored by people or corporations that want them imprisoned.”

In fact, many organizers point to the current government and President Obama himself as a key problem surrounding the treatment of Black political prisoners in the U.S.

Downs pointed to Shakur being listed as a terrorist as a clear example of this.

“This is a real doubling down by the current government, that the terrorism label, which is completely meaningless…has been so effective in scaring people and in demonizing communities that they can’t resist the temptation to go back and try to demonize all the African American political prisoners from the 60s with a terrorism label. And they are starting with Assata Shakur,” said Downs.

So instead of solely calling on the government, which may be part of the problem, organizers say they are working with an “octopus approach,” meaning they have many tactics (like tentacles of an octopus) working at once.

Finally, while most people organizing around political prisoners want their individual prisoner to be free, most if not all also point to changes in the justice system as a whole that need to be made as well.

While groups like the Free Mumia Abu Jamal Coalition say they are working to secure his release by his 60th birthday in April, they are also pursuing changes in the legislation around the death penalty, which threatened his life for almost 30 years.

While Shoatz’s supporters continue to advocate for his release, they are also pressuring the justice system to put an end to solitary confinement, which they argue is a form of torture.

“It is up to us – conscientious members of the public – to force the system to respect basic human rights standards and the strict prohibition on torture,” wrote the Campaign to Free Russell Maroon Shoatz in a statement.

While the Black community would like help from the president to protect and free its Black political prisoners, many acknowledge that this will not happen without regular people putting pressure on the president, Attorney General Eric Holder and the justice system as a whole.

“Leaders won’t do anything without pressure from the people. Democracy is not what governments do, it’s what people (do),” said Ralph Poynter, husband of political prisoner Lynne Steward, quoting author Howard Zinn. “The greatest state is that of political prisoners, who believe that the people will free them.”