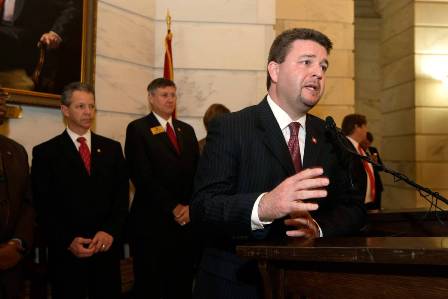 The issue of abortion rights has been an age long debate in the United States.

It has been a controversial issue throughout history with many things coming into question.

After Arkansas adopted a ban on abortions after 12 weeks of pregnancy, other states may be looking into changing abortion rights under their jurisdiction as well. Many wonder whether or not abortions should be legal and even who should be making decisions regarding those abortion rights.

Arkansas State Senator Jason Rapert designed the law banning women from aborting a pregnancy after a fetal heartbeat is detected after 12 weeks; another male political figure making laws on issues that affect millions of women throughout the nation.

Some question how the government could make a proper decision regarding abortion rights when politicians and judges are predominately male.

“It is OK for predominately male politicians and judges to decide whether a woman has abortion rights because men dominate both of these fields,” said 22-year-old Charlene Liverpool. “However, it is extremely difficult for male politicians or judges to relate or empathize for women who find themselves in such a sensitive situation.”

But not everyone agrees. Some believe that since government is predominately male, they should not be able to make decisions in regards to issues that affect women.

“I think that in order to make a decision on this topic there should be equal representation within the government between male and female politicians from various backgrounds and cultures,” said 22-year-old Nicole Behman. “So that they can come to some sort of agreement and fair decision.”

“Woman or man making the decision doesn’t make a difference to me as long as they allow the parent(s) the total right to decide or choice if they want to have an abortion,” said Troy.

It’s because this country is filled with so many people from different backgrounds; religiously, politically and even culturally that causes so many strong differences in opinions when it comes to this matter.

“The government should have the decision to make abortion rights since this is such a controversial issue,” said Liverpool. “But these rights implemented should always be fair and unbiased.”

“I think abortion is a very personal decision and is not something that lawmakers should have jurisdiction over,” said Behman. “It is a woman’s body and she is the one bearing the child. The government is not the one who will be giving birth, feeding, paying for necessities, or raising the child so I don’t think they should have a say in the matter since they won’t have a part of that child’s life.”

If there were more women politicians or women involved in the lawmaking decisions for abortion rights, some feel as though people’s views on abortions may be different. Government would then present opinions and views from both a male and female perspective.

“It is important that women politicians help to decide abortion rights,” said Liverpool. “Not only do they bring diversity, but they encourage male politicians to look at abortion issues from a holistic approach.”

“I think this would create less of a negative connotation associated with abortion,” said Behman.

While more diversity within our government would certainly help bring more views and opinions to the table when lawmakers make decisions on issues that affect millions, until change occurs it stands that predominately males are the ones that hold the reign to abortion rights in the country. And the country will continue to be divided when it comes to their stance on the matter.