Getting to Know Dr. Benjamin Carson 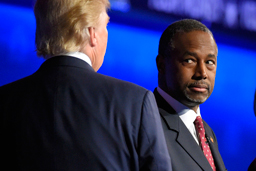 Who is Benjamin Carson?

Will the real Dr. Benjamin Carson please stand up?

With his rags to riches success story, it is not a shock that many Americans fell in love with the possibility of a poverty-stricken youth who achieved fame as a neurosurgeon climbing to the heights of the United States presidency as the ultimate outsider.

Despite his appeal to conservatives and evangelical Christians, Benjamin Carson is still seen by many African-Americans as an outsider even though he epitomizes the greatness that inner-city African-American communities can produce.

According to a New York Times/CBS GOP poll released this week, Carson has the support of 26 percent of Republican voters while former frontrunner Donald Trump has slipped to second place with 22 percent.  The difference between the two frontrunners, however, falls within the margin of error.

Unfortunately for Carson, that popularity amongst GOP voters does not necessarily translate to Black support because of critical comments about President Barack Obama and comments on “Black laziness.”

According to a May article in TheRoot.com, “Carson’s blimp-sized brand appeal snags him 29 percent favorability among Black voters…just 1 percentage point of Black support ahead of Sen. Ted Cruz (R-Texas).”

Nevertheless, somehow along the way that blimp-sized brand appeal lost its effect on people from the very same upbringing as Benjamin Carson, which might have an impact should he win the 2016 Republican presidential nomination.

Many blame his negative comments on African-Americans, Muslims (saying he would not support a Muslim presidential candidate) and other minority groups as things that will be detrimental to his campaign.

“I think he’s a viable candidate, however, with the outlandish comments he makes, he places himself into the close-minded, over the top rhetoric crowd.  And I’m still not certain as to what his platform is,” said Richie Bickham of Dallas.

According to biography.com, Carson was born in Detroit on Sept. 18, 1951 to a mother with only a third grade education and a bigamist Baptist preacher father who left Ben and his brother for his second family after their parents divorced.

To make ends meet, his mother Sonya took on two to three jobs at a time, which sometimes made it difficult to even see her children because of her busy schedule.

Despite being undereducated herself, she encouraged her boys to do well in school, requiring them to read two library books per week and write a book report, despite the fact the she had difficulty reading those book reports herself.

The love for reading transformed Ben from a poor student to an outstanding student.

After Carson received a certificate of achievement at a predominately White school, a teacher berated the White students for allowing a Black kid to outperform them scholastically.

Despite his scholastic achievements, money for college was scarce so he worked to earn money to further his education, which led to a scholarship to Yale University where he received his B.A. in Psychology.

Carson eventually attended the School of Medicine at University of Michigan, enrolling in 1973.

He married his wife Lacrena “Candy” Rustin (also a Yale University graduate) in 1975.

And he moved to Baltimore in 1977 to become a resident at Johns Hopkins University.

By the age of 33, Carson became Director of Pediatric Neurosurgery at Johns Hopkins Hospital and became famous in 1987 for separating 7-month-old German craniopagus twins Patrick and Benjamin Binder who were joined at the head.

Despite his rags to riches success story, his climb to fame has not been without its bumps and detours.

Known for having a notorious temper, Carson nearly stabbed a friend to death over his choice of radio stations.

The injuries to his friend would have been much greater if the knife had not broken off on his friend’s belt buckle.

However, not knowing the extent of his friend’s injury, Carson locked himself in the bathroom with a Bible and prayed for God’s assistance in controlling his rage.

What that produced was the God-fearing, calm presidential candidate viewers see on the campaign trail and at GOP debates.

But does that mild-mannered approach translate to leadership and strength in the Oval Office?

Many voters fed up with the political establishment believe so while others do not.

According to Carson’s official website, the leading Republican presidential candidate wants to make faith a cornerstone of American culture again.

He supports Health Savings Accounts (HSAs), not Obamacare, which he believes will empower families to make their own medical decisions.  Carson believes that HSAs will also drive down the health care costs.

Carson wants communities to be in control of their schools and wants to overturn Common Core.

He will not support any measure that weakens the second amendment granting citizens the right to bear arms.

He is for balancing the budget, but his website does not give any clear solutions to fixing the problem.

“I think Carson has what it takes,” said Bob Klaus of Cedar Rapids, Iowa.  “He’s a thinker.  He can articulate common sense very well.”

So far the GOP polls agree with Klaus, but time will only tell whether those “common sense” approaches translates to a trip to the Oval Office.