Does Pledge of Allegiance Force Instead of Encourage Patriotism? 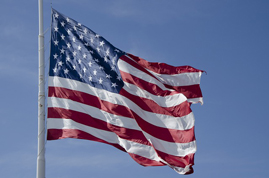 American students are encouraged to recite the pledge of allegiance to the flag everyday in school.

To Pledge or Not To Pledge that is The Question

Oct. 2 started pretty much like any day for India Landry, a senior at Windfern High School in Houston.

The only difference on that day was the fact that Landry was ill and in the principal’s office instead of the classroom.

When the school began reciting the pledge of allegiance, Landry stayed seated like she had done everyday for over a year.

However, the principal expelled her from school for not standing during the pledge of allegiance although forcing a student to stand and recite the pledge in public schools has been deemed an unconstitutional violation of a student’s First Amendment rights.

While Landry’s lawsuit against the school district will likely be an easy case for her to win, is the pledge of allegiance really necessary in schools?

What is the purpose of the pledge of allegiance?

And does the pledge of allegiance force patriotism on young kids?

“The main reason that the pledge of allegiance is said in schools is to instill a sense of patriotism amongst students,” according to Teach-Nology.com.  “Some believe that it shouldn’t be controversial at all because it the process is just what it is described as: pledge.  It is certainly far from being an oath which can bind a student against what they are saying.”

Nevertheless, what do African-American men think of the pledge of the allegiance being said in schools during these polarizing racial times?

The national anthem has become a controversial topic at sporting events since 2016, therefore is the pledge of allegiance only inviting more polarization?

James Ballentine of Los Angeles said, “I believe patriotism is earned and shouldn’t be forced on anyone.  I also believe today’s teachers have their hands full trying to compete with today’s technology, and their job is to educate and make sure tomorrow’s youth are ready to further their education as well as compete in the workplace.

“So with that said I believe parents are responsible for that aspect in a child’s life.  But playing devil’s advocate as I see what we are dealing with today and I’m seeing so much racism being disguised as patriotism.  Can we trust parents to teach patriotism?  So we have to entrust this to our educators.”

Attorney Exkano Philson of Houston stated, “The pledge is just that, a pledge.  The First Amendment guarantees all citizens the right of freedom of speech whether a person is for or against the pledge, prayer or otherwise.  Freedom and rights mean just that, a choice by any citizen to participate with the majority or against the majority.

“All military, police or peace officers take an oath to uphold the constitution against all enemies foreign and domestic.  It seems these days, the domestic enemies are attempting to destroy the freedoms and rights granted to all citizens.”

Regardless of the outcome in Landry’s case, her stance on the pledge of allegiance has altered, if not destroyed, her senior year at Windfern High School.

However, her stance should not have impacted Landry one bit.

The pledge of allegiance is recited in school to encourage patriotism, but maybe a person is expressing patriotism just by exercising the rights that all American patriots possess.