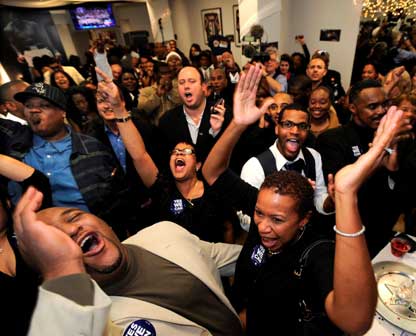 On August 6, 1965 President Lyndon B. Johnson signed one of the most important pieces of legislation in America’s history.  For the first time, more than 2.5 million African Americans were able to cast their ballots in elections without fear, intimidation or physical harm.  The Voting Rights Act abolished literacy tests, poll taxes, grandfather clauses and all other unnecessary requirements that had prevented African Americans from having their voices heard in American politics.

However in 1965, very few Americans could foresee the day when a person, who would have been unable to vote prior to the Voting Rights Act, would receive enough votes to be elected to the world’s highest office in a country where African Americans are still very much in the minority.  As a result of Barack Obama’s election as the 44th President of the United States, many have questioned the need for certain provisions of the Voting Rights Act.  The Northwest Austin (Texas) Municipal Utility District Number One, a government board dedicated to providing local services to approximately 3,500 people, has recently appealed to the United States Supreme Court to overturn Section 5 of the act, calling it “the most federally invasive law in existence.”

“The elephant in the room is what to make of the Obama election,” said Columbia law professor Nathaniel Persily.  “Does the election of the first African American president undermine the central justification for parts of the Voting Rights Act?”

In April, the U.S. Supreme Court will review a lower court ruling that upheld Section 5 of the Voting Rights Act, which requires all or parts of 16 states with a history of racism, to receive approval before implementing any changes in election procedures.  States affected entirely include Alabama, Alaska, Georgia, Louisiana, Mississippi, South Carolina and Texas.  States partially affected include California, Florida, Michigan, New Hampshire, New York, North Carolina, Virginia and South Dakota.

However, the local Texas government at the heart of this litigation argues that they have no history of racial discrimination and many believe that America no longer needs such legislation in a “post-racial society.”

But what does Obama’s election actually imply?  Has America completely overcome its racist past or is racism still an obstacle to true equality for people of color?

According to defendersonline.org, a whopping 131 million Americans cast their vote for the next commander-in-chief in November 2008, an eight percent increase from the previous election in 2004.  Obama received a total of 53 percent of the vote, which was a significant percentage considering the much closer elections in 2000 and 2004.

Nevertheless, White voters were the only demographic that Obama was not able to win majority support.  Furthermore, Obama could only muster support from 10 percent of White voters in Alabama.  In addition, many Southern White Democrats stated that they would support Republican John McCain because they could not bring themselves to vote for an African American for president.

Consequently, Obama was forced to obtain secret service protection earlier than any other presidential candidate in history because of assassination threats.  According to telegraph.co.uk, the secret service has investigated over 500 death threats against the future president.

Prior to accepting the Democratic nomination for president, Tharin Gartrel and Nathan Johnson were arrested in Denver for making assassination threats towards Obama during the Democratic National Convention.  According to CBS station KCNC-TV, one suspect said they were “going to shoot Obama from a high vantage point using a rifle … sighted at 750 yards.”

However, in spite of the conflicting evidence of racial advancement, America’s recent election of President-elect Obama has proven that this country has what it takes to unify despite racial differences.  The struggles that those from the Civil Rights era endured led to such monumental achievements as the Voting Rights Act and the historic presidential election of 2008.  But it remains to be seen if this is proof of a permanent post-racial society or if race will continue play a factor and legislation such as the Voting Rights Act is necessary to ensure equality.