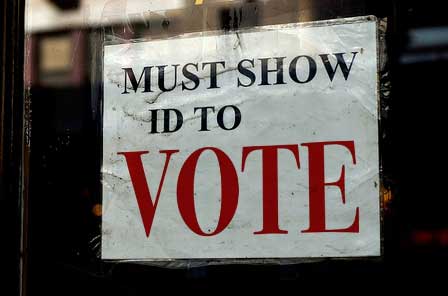 Voter ID Laws: The Impact on Election 2012 and Civil Rights

With the 2012 election fast approaching and a presidential race leading the campaign coverage, voter ID laws have taken on an even bigger role as proponents rally for more voter protection and opponents charge these new regulations infringe on hard fought voting rights.

Following the Supreme Court’s decision in Citizens United in 2010 that led to the creation of super PACs and the major influx of campaign dollars for the 2012 elections, the voter ID laws have been a top drawer item.

However, these laws are different in each state and they lack uniformity creating chaos and confusion.

In addition to the laws being different, large voting constituencies that will be negatively impacted by these laws and their unlawful exclusion could well stem the tide of major state and national campaigns.

The Brennan Center for Justice at the New York University School of Law recently released a survey that detailed millions of Americans who do not have the government issued photo identification, such as a passport or driver’s license, and do not have readily available documented proof of citizenship.

Also, the survey reported that even more, particularly women, do not have proof of citizenship with their current name.

Most importantly, the survey highlighted that certain groups specifically the elderly, poor, and minority citizens are less likely to possess these forms of documentation than the general population.

Community groups and civic associations are challenging these laws that are posing as reminders of similar restrictive practices that were used at the dawn of the civil rights era in the form of poll taxes and literacy tests.

Within the voter ID law controversy; there are various restrictive components in addition to requiring photo identification.

These components include legislation requiring potential voters to provide a birth certificate to prove citizenship. This legislation was initially passed in Alabama, Kansas and Tennessee, with the Tennessee version only directed at residents “flagged by the state as possible non-residents.” Now, 17 states have introduced similar legislation.

Another component involves the access to voting and the ability to vote absentee.  With at least nine states introducing legislation to reduce early voting periods, four, including Florida, Georgia, Ohio and Tennessee succeeded in passing laws that reduced early voting.

Also, four states tried to reduce absentee voting opportunities. These challenges to the civil right of voting also impacts students who are often away from their voting state and would have to use an absentee ballot.

These restrictive practices could also impact our military men and women serving abroad with families stateside who have to move around.

Florida and Wisconsin passed laws making it more difficult for people who move to stay registered to vote.

Finally, the reinstatement of voting rights for those who have served their time has become a rallying cry for many.

Organizations such as the NAACP, UNCF, ACLU and others are vigorously fighting the new voter ID laws that are being equated to voter suppression and discrimination.

With lawsuits and protests, these advocates are raising awareness regarding infringements on voting and denial of civil rights.

The importance of the vote is clear and every voice needs to be heard.

Understanding the implications of the voter ID laws – and the restrictive components that states are enacting – are important lessons for us all to learn.

The right to vote is more than a choice, it is a privilege. Educate yourself and get registered.